Governance and Security in Post-ISIL Iraq

The advance of the Islamic State of Iraq and the Levant (ISIL) through Iraq has irreparably changed the country. In its wake of genocide and destruction, the terror group has shattered the social contracts of governance and coexistence at every level, displaced millions from their homes, and decimated hundreds of cities, towns, and villages. As Iraqi Security Forces, Kurdish Peshmerga Forces, and the international coalition continue to liberate the city of Mosul from ISIL, its last stronghold in Iraq, actors on the ground must forge new political settlements. ISIL grew out of political discontentment, and if the region is going to prevent a resurgence, the government must make reforms. Masrour Barzani provided the perspective of the Kurdistan Regional Government on the ongoing liberation of Mosul, the future of governance in the region, and American engagement in Iraq.

Masrour Barzani, Chancellor of the Kurdistan Region Security Council, shared his perspective on ISIS, the Battle of Mosul, the Iraqi-Kurdish coalition, and the future of Iraqi Kurdistan. On December 8, 2016, the Middle East Program hosted “Governance and Security in Post-ISIL Iraq,” with Barzani. Henri J. Barkey, Director of the Middle East Program at the Wilson Center, moderated the event.

Barzani began the event by citing Woodrow Wilson and his belief in self-determination, which is the central goal for the Kurds. He then transitioned into a discussion about ISIS, which he asserted has quickly become a full army. With U.S. support, however, the Iraqi-Kurdish peshmerga militia forces have halted—and in some cases reversed—ISIS’s advance. The Kurds have increased their cooperation with Iraqi military forces, resulting in the assault on Mosul. Barzani stressed that it was imperative for ISIS to be denied any military advantage, access to social media for recruitment, and financial resources. Barzani then argued that ISIS’s proselytization of violent extremism can be countered by spreading peaceful Islam. The rise of ISIS is a symptom of a much larger problem, Barzani affirmed, which can be resolved through peaceful dialogue. He then stated the development of relations with Iraq must be natural. He concluded that the Kurds have had a lot of support from the United States and have expectations for the next administration to continue that support.

Barkey began his conversation with Barzani with a question about Mosul and how long Barzani believes the assault will last. Barkey also asked what Barzani would recommend to the Iraqi government in terms of recovery of such a diverse city. Barzani said Mosul is indeed diverse—with Shia’s, Sunnis, Yazidis, Christians, Kurds, Arabs, and other groups calling the city home. In terms of recovery, there has to be political cooperation between these groups, he noted. In order for them to live peacefully, he indicated the objective cannot only be to defeat ISIS, but also to repair the distrust between these groups.

In the question and answer portion of the event, an audience member asked about the future of Iraq when so many external parties are involved in the country’s affairs and in the conflict with ISIS. Barzani said these parties are trying to protect their interests in Iraq, but they must respect Iraq’s decision when the time comes for a referendum for Kurdish independence. Another questioner asked Barzani to elaborate on the Kurdistan Regional Government’s (KRG) expectations of the Trump administration, and Barzani responded that U.S. support must continue under President-elect Trump. The defeat of ISIS will not bring an end to terrorism, he argued, especially if the political reasons that led to their rise are not addressed. Barkey inquired if the Kurds want the presence of U.S. troops, to which Barzani replied that the Kurds would welcome a U.S. presence to help build their nation. However, as he explained later, ISIS will not be defeated by eliminating the group in Iraq; ISIS also must be defeated in Syria, but the peshmerga has no plans to pursue it into Syria.

Another audience member asked when the independence referendum would be held. Barzani said the negotiations with Baghdad were in process and the referendum will take place when both sides agree on the parameters. Barzani was then asked what the Kurds’ three most “pressing needs” are. Barzani listed support for internally displaced people (IDPs), arms and training, and realization of Kurdish political aspirations. Barkey asked about refugees in Iraqi Kurdistan, and Barzani said while there are a number of Syrian refugees, the IDP population is increasing, which is putting a strain on resources. Barzani was then asked if the KRG’s intelligence agency shares any information with Syrian Kurds or with Iran. Barzani answered that it shares intelligence with members of the coalition to defeat ISIS.

The conversation then shifted to the KRG’s financial situation with respect to oil and U.S. funds. The United States has been generous in providing financial support, he said, but indicated many oil companies had to close their operations because of their proximity to conflict zones. Toward the end of the event, an audience member asked Barzani if he believes there is a growing acceptance in Baghdad of Kurdish independence. He stated his respect for Iraqi Prime Minister Haider al-Abadi and stressed the importance of a positive relationship with the Iraqi government. 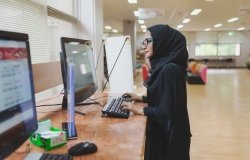