A panel of Guatemalan and international experts evaluated the corruption, impunity, and public insecurity that was brought into sharp relief after the May 2009 murder of prominent Guatemalan lawyer Rodrigo Rosenberg.

The May 2009 murder of prominent Guatemalan lawyer Rodrigo Rosenberg and the release of a videotape he made prior to his death plunged Guatemala into a deep political and institutional crisis. In the video recorded prior to his death, Rosenberg accused Guatemalan President Álvaro Colom and his wife of murder and corruption, prompting calls for Colom's resignation as well as popular demonstrations in his support. The scandal brought into sharp relief broader issues of corruption, impunity, and public insecurity in Guatemala. To discuss these important issues, the Latin American Program, together with Florida International University's Latin American and Caribbean Center, convened a distinguished panel of Guatemalan and international experts to evaluate the crisis within a broader context of political, economic, and social trends. 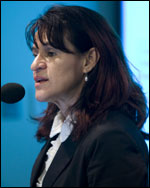 Ana Isabel Garita, Chief of Mission, International Commission against Impunity in Guatemala (CICIG), addressed overall trends in violent crime and impunity. The annual number of homicides has almost doubled since the signing of the peace accords in 1996, and the rate of impunity for murders is 98 percent. In 2008, an average of 17 murders per day took place in Guatemala. The number of women murdered annually has also more than doubled since 2001, a reflection of domestic violence and also possibly linked to organized crime. The CICIG, established by an agreement between the Guatemalan government and the United Nations, began operations in September 2007, with the aim of supporting the state in identifying and dismantling illegal security structures operating clandestinely in Guatemala. The CICIG provides technical support to the police, the office of the attorney general (Ministerio Público), and other judicial and human rights bodies. In addition, the CICIG's mandate permits it to join as a plaintiff (querallante adhesivo) once the government has filed formal charges against an individual or organization. CICIG has joined the case against former president Alfonso Portillo on charges of embezzlement.

According to Garita, the institutional challenges that Guatemala faces are: 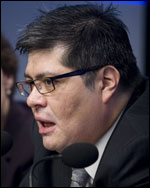 Francisco Jiménez, Technical Secretary for Guatemala's National Security Council, argued that the state of democratic governance in Guatemala is precarious. The 1996 Peace Accords provided an important opportunity for the advance of formal democracy, but that security and intelligence bodies that had been responsible for dramatic human rights violations did not simply disappear by decree. These structures no longer have the resources of the state, but they continue to operate in clandestine fashion and have been able to take advantage of the new structures that have been created. Without further reform of the security and justice sectors, Jiménez warned, impunity will be maintained and "we are not going to construct democracy." The Rosenberg case has brought Guatemala to a critical threshold, he said. How the case is handled could either lead to a strengthening of institutions and of governability, or to a loss of the "rules of the game" that would be devastating to the system as a whole. Interests that do not necessarily favor democratic governance are involved in the case, he concluded. 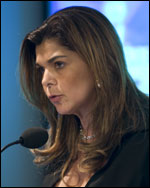 Silvia Gereda, Director of the Guatemalan daily El Periódico, oversaw the publication of a series of stories in January 2009 about impunity and insecurity in Guatemala, showing alarming statistics about levels of crime and the incapacity of the judicial system. The April murder of prominent businessman Khalil Musa (former head of the board of the National Coffee Association) and his daughter Marjorie provoked indignation among Guatemala's industrial and business community. Rodrigo Rosenberg had served as lawyer for the Musa family. In the video he made before his death, Rosenberg accused President Colom, his wife, the president's secretary, and the treasurer of his campaign of being responsible for his murder because of his role as lawyer for the Musa family. He also accused public officials of laundering money through Banrural and of other illicit activities.

Copies of the video were circulated at Rosenberg's funeral, prompting calls for Colom's resignation. The government flatly denied the charges, attributing them to sectors favoring a coup and endeavoring to mobilize support at the local and international levels. Opposition legislators alleged that state funds were used to bring Colom supporters, including mayors and governors, from the countryside to participate in demonstrations in favor of the government. Meanwhile, social networking sites such as Facebook, Twitter, and MySpace played a central role in disseminating the video and mobilizing large numbers of young people demanding justice in the Rosenberg case and an end to impunity. Gereda said that this form of youth mobilization via social networking is an unprecedented occurrence in Guatemala. 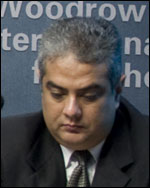 Nery Rodenas, Executive Director of the Office of Human Rights at the Archdiocese of Guatemala, strongly condemned Rosenberg's murder, but warned against jumping to conclusions about those responsible. He compared the case to other high-profile assassinations in Guatemala, in which political figures with a shadowy past helped circulate false rumors about possible motives for or perpetrators of the crime. Such had been the case following the murder of Archbishop Juan José Gerardi, who had released the report "Guatemala: Never Again" that documented human rights violations in Guatemala and the army's responsibility for them. Rodenas blamed "underworld gangs" for maneuvering to discredit the report along with the work of the Catholic Church and its human rights office. He made parallels between the Gerardi and Rosenberg killings, noting the political and institutional crises sparked in their aftermath as well as the involvement of certain individuals "linked to organizations with dark objectives" who surfaced in connection with both cases. One such person, Luís Mendizábal, has been linked to coup attempts as well as to arms trafficking. According to Rodenas, Mendizábal admitted to having convinced Rosenberg to make the video, and then distributed it in the aftermath of Rosenberg's death. (Mendizábal had previously served as defense attorney for one of the army sergeants found guilty of the murder of Archbishop Gerardi).
Rodenas cautioned that alternative hypotheses about who was involved in Rosenberg's murder should be fully investigated. Moreover, the media has and will continue to play a crucial role in the case; given its power to shape opinion, it should manage the facts with utmost responsibility. 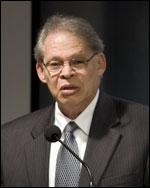 Ricardo Stein, Special Advisor to the Regional Coordinator of the United Nations in Guatemala, says that "the [country's] current situation is not the result of Rosenberg's assassination," although it exacerbated long-standing problems of governance. He qualified the moment as "the most delicate and severe institutional complication of the past 23 years" in Guatemala. Stein identified several structural issues that had not been sufficiently addressed in the years following the signing of the 1996 peace accords.

1) The deep institutional weakness all branches of government, and their lack of credibility and legitimacy;

2) The deep divide among the population due to multiple exclusions by class, ethnicity, and culture; and

3) The lack of leadership and the continuation by the "old guard" of old battles recreated under new disguises.

Whatever the outcome of the Rosenberg case, he said, the damage to the country has been irreparable. He predicted that the case will never be fully or satisfactorily clarified, and that "very obscure forces" with a strong influence within the state easily take advantage of the turmoil.

Stein outlined "synergic crises" in Guatemala in the economic, social, and political arenas.

In the economic and social realm, the severe impact of the global economic crisis was reflected in declines in exports, remittances, tourism, and tax revenues. The fiscal crisis was such that approximately 20 percent of the state budget was not financed. A 15 percent increase in inflation, including sharp increases in food and energy prices, and rising unemployment in the formal sector, sent some 700,000 additional people into poverty in 2008. Social cohesion programs overseen by the president's wife suffered from politicization and a lack of transparency.

In the political arena, corruption, the lack of transparency, impunity, violence and insecurity have led to a severe loss of credibility of Guatemala's institutions. The state has lost control of the legitimate use of force, and private security guards vastly outnumber the National Police. Impunity and the lack of independence of the judiciary are corroding Guatemalan society, permitting the flourishing of organized crime. Stein described the new mobilization of urban youth as a "space for opportunity," but that the movement lacked leadership. He accused all opposition parties of taking advantage of the turmoil created by the Rosenberg case, stressing the importance of determining who was responsible for his murder.