The President-elect will have to deal with a contentious China relationship in 2017, when Hong Kong will elect a new Chief Executive and Taiwan will continue its transition to the Tsai Ying-wen era, balancing relations with the Mainland and the United States as it goes. Please join us by phone for a discussion of the Trump administration’s prospects and priorities as seen from Beijing, Taipei, and Hong Kong.

The President-elect will have to deal with a contentious China relationship in 2017, when Hong Kong will elect a new Chief Executive and Taiwan will continue its transition to the Tsai Ying-wen era, balancing relations with the Mainland and the United States as it goes. Moderating the panel is Robert Daly, Director, Kissinger Institute on China and the United States.  Speakers include Ye-chung Lu, National Cheng-chi University, Taipei; Da Wei, Director and Research Professor, China Institute of Contemporary International Relations (CICIR); David Zweig, Director, Center on China's Transnational Relations, the Hong Kong University of Science and Technology

Robert Daly began the discussion by noting that President-elect Trump had been uniformly accusatory toward Beijing on trade and economics from the beginning of his campaign.  Since his election, Trump has said several times that the United States should not be bound by the One-China policy, which the U.S. has followed since the Carter administration in 1979.  Daly underlined that “this is the very foundation of relations between China and the United States and the leadership in Beijing views this policy as non-negotiable.”  Many leaders in Taiwan are also concerned with President-elect Trump’s comments as they don’t want to be “caught in the middle of escalating tensions between the United States and China.”   Daly also noted that officials in Hong Kong are growing increasingly concerned with Trump’s trade rhetoric and tensions are high with the pending election of a new Chief Executive of Hong Kong early in 2017.

Ye-chung Lu underscored the importance of Taiwan working closely with the Trump administration.  Lu noted that he expects to see closer security ties between the U.S. and Taiwan along with closer economic ties.  Lu highlighted that, in 2015, Taiwan was the 18th largest importer and 17th largest exporter of goods to the United States.  Overall Taiwan is the U.S.’s 9th largest trading partner.  Examining two key challenges, Lu observed that the death of the Tran-Pacific Partnership under Trump would be a major concern for Taiwan’s leadership, as would rapid fluctuations in cross-strait relations:  “A bad relationship between the United States and China is not necessarily good for Taiwan.” Lu pointed out that “uncertainty is very high now, which leaves Taiwan with very little room between the two giants.” Taiwan’s leaders have been stressing to Beijing that they still seek stability and “will not revert to the old path of confrontation.”

David Zweig stressed that the bottom line for Hong Kong is trade.  He noted that, “if a trade war occurs or tariffs rise, every dollar lost between mainland China and the United States hurts Hong Kong.”  Zweig pointed out that Hong Kong no longer has a manufacturing base but employs millions of laborers in the Mainland.   The trade team that President-elect Trump has announced so far has many Hong Kong citizens very concerned for the future.  Zweig also noted that Hong Kong officials have been neutral on issues surrounding the South China Sea.  Above all else, Hong Kong seeks stable security and trade relations.

Zweig also underscored that, overall, he is pessimistic about that next year in U.S.-China relations.  Zweig said that many Hong Kong citizens would like the President-elect to continue to support democratic principles and rights in Hong Kong.  With 60% of the population supporting democratic political parties and 40% supporting parties backed by the Mainland, Hong Kong voters want a U.S. president who supports democratic principles. Zweig warned that this hope may be frustrated, as Trump has continuously talked up relations with autocrats like Russia’s Putin.  Any worsening of the relationship between China and the United States could have big repercussions for the over sixty thousand U.S. citizens working in Hong Kong, he added.  Along with trade issues, Zweig mentioned shipping and intellectual property as concerns in the coming year.

Da Wei observed that, during the 2016 campaign, many Chinese had expressed hope for a Trump administration and preferred him to Hillary Clinton.  He pointed out that Trump’s rhetoric since winning office had changed this assessment.  Trump’s phone call with Taiwan President Tsai Ing-wen was a turning point for many in China.  Professor Da noted that any indication of a move away from the One-China policy by the United States would be unacceptable to the Chinese government.  “We understand that Trump’s number one priority is economy and jobs, but he mistakenly linked China to the goal he wants to achieve, blaming China for U.S. job losses and the many domestic economic problems in the United States. This is not correct.”

Professor Da warned against Trump’s seeming desire to use Chinese “core-interest issues,” such as the South China Sea and One-China policy, as bargaining chips.  He underscored that progress on trade issues could be made, but only if they were not linked to regional security challenges.  Da Wei noted that U.S. presidents from Nixon onward had considered engagement with China as the pillar of U.S. strategy in Asia.  While the Chinese may have bristled at some of the specifics of Engagement, they dealt with the United States through this framework.  Now the Trump administration wanted to challenge this strategy, he said, warning that upending of relations between the United States and China—the two largest economies and two of the largest nuclear powers on earth--could prove dangerous.  Da Wei said that China was bracing for a difficult year, but that in the long run he was cautiously optimistic, as the U.S.-China relationship was to important to devolve into conflict. 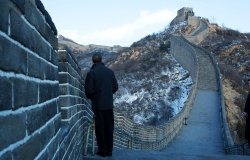 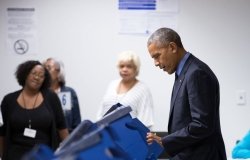