On November 13th, the Brazil Institute hosted a half-day conference on what Brazil's undeniable economic and political realities mean for the next president, his administration, and the country.

On Tuesday, November 13th, the Brazil Institute hosted a half-day conference on what Brazil’s undeniable economic and political realities mean for President-elect Jair Bolsonaro, his administration, and the country.

In the first session, the International Monetary Fund discussed its finding from the latest Article IV consultation with Brazil and the prospects for economic and fiscal reform. The second session took a broader look at the current challenges facing the Brazilian economy, including an analysis of its structural characteristics and key sectors, with editors and contributors of the Oxford Handbook of the Brazilian Economy (2018). In the third and final session, panelists discussed the capacity of the new administration to navigate Brazil’s changing political landscape.

Session I: IMF Outlook for Brazil and the Political Economy of Reform 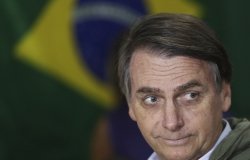 Event
Democracy
Ground Truth Briefing | The Day After: Implications of the Presidential Runoff Results in Brazil
On Monday, October 29, 2018 at 3:00 – 4:00 ET