Human Rights and the Arts in Iran Today

Human Rights and the Arts in Iran Today

In a conference addressing the role of human rights and the arts in Iran, speakers from the arts and literary community discussed how different forms of expression bring varying human rights issues to the fore in Iran. While politics, economics, and nuclear capabilities tend to dominate contemporary discussions about Iran and preclude mention of the multi-faceted art scene that has emerged since the Islamic Revolution, participants addressed this artistic flourishing and its implications for human rights in Iran.

Milani began the discussion by speaking about the artistic renaissance in Iran as a "collateral benefit" of the Revolution. Despite the regime's best attempts to silence them, Iranian artists have expressed their concerns and criticisms through their artwork. She noted the repressive measures artists have endured, particularly in the wake of the contested 2009 election. By responding to these assaults with a steadfast rejection of violence and a commitment to the medium of art, Milani contended, Iranian artists have given voice to the nation's sense of resistance and optimism.

In her presentation, Mahdavi sought to problematize the glorification of "underground music" in Iran as social change. She pointed out the ambiguity of the term "underground" itself, noting that for some it implies music outside the mainstream or by unsigned artists, while for others it connotes mystery and rebellion. She discussed how Western observers exoticize Iranian musicians simply because they come from Iran and mistakenly regard the combination of modern rock and hip-hop they play as an agent of social change instead of as a mode of self-expression. In doing so, these observers fail to appreciate the complex identities of these musicians and their fans, and they neglect to examine what the musicians label themselves or claim to be doing. Mahdavi did point out that although some music is intended as political or social commentary, uniformly casting all musicians in the same light erases individual narratives of artists which are valuable sources of insight into social change.

Toscano spoke of Iranian film as both a medium for artistic self-expression and a forum for the examination of issues related to human rights in Iran. He described artists as carriers of messages that touch upon matters of ethics, justice, and human rights, claiming that Iranian films which comment upon these themes implicitly, but clearly, criticize the government and pay homage to Iranian culture. He noted that artists have frequently encountered problems from those in power, and after the contested 2009 election, these problems intensified for Iranian artists as the government closed the already limited space for artistic expression. Toscano maintained that Iranian artists will overcome this adversity, and he claimed the endless struggle for human rights in every country needs artists that can reach people from every walk of life.

Darznik addressed the recent increase in Iranian immigrant narratives, particularly in memoirs by Iranian women in the diaspora. She spoke to the vital role life narratives play in helping readers understand issues in Iran, and she warned against an increasing tendency to conflate books by Iranian women with their recent success instead of affording them deep textual analysis. She provided examples of memoirs that capture human rights themes such as freedom of speech, political persecution, and mass displacement and that blur the boundaries between private and national, individual and collective. These works, as written by Iranian immigrants in America, speak to both countries and their long entanglement. 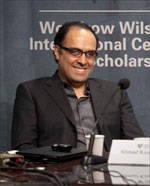 To start the second panel, Khosrokhavar began by discussing what he observed from his interviews with Iranian youth: "individualization, secularization, and feminization." He noted these were indicative of the struggle to reconcile traditional loyalties and obligations with the desire for free expression through dress and music. Khosrokhavar referred to youth who listen to music though it may be banned by their religious leaders, and to young women who forgo the full length chador for the simpler veil. He stressed the high level of ambivalence exhibited by these youths – who are pushing the boundaries of what is permitted, transgressing norms, and overcoming feelings of guilt – that allows them to circumvent obstacles to free expression without having to acknowledge the full extent of their defiance.

Kiarostami noted that the preferred media outlets of the Iranian youth are not being utilized to reach out to them and discussed the self-expression by a new generation of Iranian youth through music and music video. Kiarostami's visual presentation included three music videos that demonstrated different methods of musical and visual expression. The first showed Iranians in the streets of Tehran going about their daily lives while reciting social commentary as the lyrics of the song. The second was a video called "Bunch of Soldiers" by a hip-hop group called Hich-Kas, which focused on male Iranian youth singing of their national pride and of the struggles they endure. The third video was of a man doing a traditional dance to harmonic vocals.

Mohebbi presented his perspective on visual expression by discussing how, through the advancement of documentation technologies, the line between participation and spectatorship is blurred. He noted that the free speaker risks his or her life for the sake of vigilance, and not just literary observation of events. He commented on people being "armed" with cameras in order to witness brutalities and make it publicly known. He used the example of the 2009 protests in Iran that were broadcasted to the world because of mobile phone videos and photos. Mohebbi likened the camera to an extension of one's body whose movements and placement has the ability to change visual architecture and political scenery.

Mahdavi closed the panel by bringing together themes that transcended all of the speakers' remarks. She commented that they all addressed exploration and expression of identity through different means, pushing boundaries to encourage both creation and creativity, and the ability to and importance of capturing the present as it truly is.

Professor of Persian Literature and Women’s Studies, Chair of the Department of Middle Eastern and South Asian Languages and Cultures, University of Virginia