This conference celebrated the contributions of Margaret E. Crahan, Director of the Kozmetsky Center, to human rights scholarship and activism over many decades.

This conference celebrated the contributions of Margaret E. Crahan, Director of the Kozmetsky Center, to human rights scholarship and activism over many decades. Panelists agreed that much progress has been made since the democratic transitions of the late 1980s and early ‘90s, but the persistence of discrimination, poverty, and inequality in the region, along with the ongoing search for justice for past violations, indicate that the struggle for human rights and accountability is far from over.

Discussing issues of human rights accountability, Débora Benchoam, attorney for the Inter-American Commission on Human Rights and former political prisoner in Argentina, acknowledged that providing testimony about human rights violations is the first step in the long process of regaining dignity. But she underscored that testimony should be complemented by a focus on the consequences of human rights violations for a nation's past and future. She also emphasized that effective deterrence of future human rights violations requires decisive efforts against impunity. Elizabeth Lira of Universidad Alberto Hurtado, Chile, highlighted that the success of reconciliation efforts against a backdrop of human rights violations depends on the government's first acknowledging that injustice did take place, and then exposing the institutional and systematic elements of the crimes. She distinguished between forgiveness on the personal and national levels, arguing that on the political level, forgiveness via amnesty laws can be ineffective at preventing recurring violations. 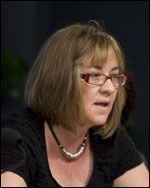 Professor Jo-Marie Burt of George Mason University traced the weakening of amnesty laws in Latin America which were once a "sanctuary of impunity," and noted that these laws are no longer applied to crimes against humanity. Alexander Wilde of the Universidad Alberto Hurtado noted that under various governments of Chile's Concertación, small and informal human rights groups have had a significant impact on influencing government policy. He contrasted the Chilean case with Colombia, where growing awareness of the universality of human rights is set against a backdrop of ongoing political and criminal violence.

Addressing the relationship between human rights and democracy, George Vickers of the Open Society Institute argued that struggles for human rights have been intimately linked to the struggle for democracy. The 1990s and mid-2000s were characterized by a failure of democracy "to deliver the goods in Latin America," a failure marked by increased crime rates, delinquency, corruption, and continuing impunity. Today's human rights movement is tri-fold, comprised of groups fighting for accountability for past crimes and overcoming impunity, for economic and social rights in addition to political rights, and for institutional strengthening (for example, in the areas of law enforcement and judicial systems). 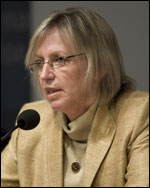 Conference participants also addressed the myriad ways that the international community has not accorded to economic and social rights the same primacy as political and civil rights. California State University-Fullerton professor Denise Stanley discussed implementation of the United Nations Charter on Human Rights. The Charter affirms the basic rights "to work and to remunerable pay," two rights often overlooked. According to Stanley, states should be held accountable for economic rights, something that would imply that basic needs such as food and water would not go unmet. Henry Carey of Georgia State University questioned whether the international community has an increased concern for economic, social, and cultural rights. States have focused historically on political and civil rights, and the lack of systematic application of a general framework for guaranteeing economic, social, and cultural rights points to enduring challenges for the NGO and state sectors. 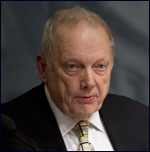 Looking toward the future, Luigi Einaudi, former assistant secretary-general of the Organization of American States, discussed three ways that the U.S. exercise of power leads to conflict on human rights matters: 1) U.S. power is normally exercised without reference to the law; 2) the United States possesses asymmetric power compared to other countries; and 3) the United States has an assistance mentality based on the mindset that "we know best and we'll teach you how to do it." Einaudi emphasized the need for the United States to ratify the negotiated and signed treaties immobilized in the Senate, and to work with other countries in a multilateral setting.

According to Luis Maira, Chilean ambassador to Argentina, to understand the future prospects of human rights, one must examine the past. He outlined five common themes in the process of democratic transition in the region: truth and justice, the search for economic development, reintegration into the international community, institutional normalization with a constitution and laws, and the search for social harmony and reconstruction of political and social organizations. Although the beginning of the transition period is not difficult to discern, much more complicated is assessing when it has been completed.

Conference co-organizers included Ariel Armony of Colby College, Katherine Hite of Vassar College and Mark Ungar of the City University of New York. Ungar and Hite are preparing an edited book based on papers prepared for the conference.