Inclusion in Combat and Security: A Book Event with Major MJ Hegar

The Women in Public Service Project hosted a conversation with Major Hegar about her military career and her efforts to advance women's leadership in the military and the security sector overall.

Inclusion in Combat and Security: A Book Event with Major MJ Hegar

On October 27, The Wilson Center’s Women in Public Service Project hosted a conversation with Major Mary Jennings “MJ” Hegar about her memoir,Shoot Like a Girl: One Woman’s Dramatic Fight in Afghanistan and on the Home Front, and the role of women in combat and security. The discussion was moderated by Sherri Goodman, Wilson Center Senior Fellow.

Major Hegar joined the U.S. Air Force in 1999, was selected to pilot training by the Air National Guard, finished at the top of her class, and flew combat search-and-rescue missions during her three tours of Afghanistan. For her service, she received the Purple Heart and the Distinguished Flying Cross with Valor Device. Upon returning home, Major Hegar fought to ensure that all jobs in the military are open for competition to both men and women by leading the suit calling for the reversal of the Combat Exclusion Policy, which the Secretary of Defense repealed in 2013. During her visit, she discussed her experiences in the military, and the relationship between improving access and equity for women in the armed services, and enhancing overall military effectiveness.

“There are many things throughout history people thought women couldn’t do… Women and other marginalized communities simply continue to prove that wrong.”

“We need women in combat… Sometimes women are the best at their specific jobs. It is definitely a military effectiveness question when you talk about limiting half the population from even applying for some of our military elite positions.”

“Don’t put quotas on women in leadership, let nature take its course... We need to monitor it.. The bigger deal we make out of it, the harder it becomes.”

“I think we’ve seen some really great first steps. I think thirty years ago we probably thought thirty years from then we would be farther along. I think things like boards and forums and goals like 50 by 50 are going to help.” 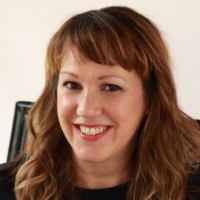 Author, Shoot like a Girl: One Woman's Dramatic Fight in Afghanistan and on the Home Front