Overview of media treatment of Nanotechnology

Video of this event is now available. Follow the link in the See Also box to the right of this screen.

Nanotechnology is hailed by some scientists, venture capitalists, and government officials as the new industrial revolution. But two media experts at a December 14, program sponsored by the Project on Emerging Nanotechnologies report that, compared to other areas of science, nanotechnolgy newspaper coverage is scarce.

The most notable characteristic of media coverage of nanotechnology is the lack of it," according to Andrew Laing, president of Cormex Research. Laing's findings are drawn from a 2004 survey of top U.S. and Canadian newspapers funded by the government of Canada.

"On average, Canadian and American news outlets surveyed published slightly more than one news item of substance on nanotechnology per month last year. To put that in context, the survey of twelve American print publications—including outlets like the Wall Street Journal, New York Times and Washington Post—found an average of eight items per month in 2004 on stem cell research, and over two items on agricultural biotechnology," said Laing. 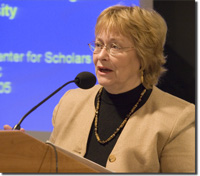 In a larger, baseline study analyzing the content of selected U.S. and U.K. newspaper articles obtained during 2000-2004 from the Lexis-Nexis newspaper and newswire database, Lehigh University professor Sharon M. Friedman discovered that "The number of newspaper articles found about health and environmental risks was low for both American and British coverage. Only 71 U.S. and 50 U.K. health and environmental risk articles were found between 2000 and 2004, with the New York Times (13) and Washington Post (9) running the most." These findings were reported by Friedman and co-author Brenda Egolf in the Winter 2005 issue of IEEE Technology and Society Magazine.

Despite negative headlines, Friedman believes that from her analysis, it does not appear that U.S. or U.K newspapers and wire services published articles from 2000 to 2004 that would negatively influence public opinion about nanotechnology. This is because the health and environmental risk coverage has been generally positive and contained positive as well as negative information.

Citing a 2004 public opinion survey showing that 80 percent of the American public had heard little or nothing about nanotechnology, Friedman warned government officials and industry that "The current public calm surrounding nanotechnology—and the public's lack of awareness about nanotech—could change radically. All it would take would be mass media coverage of a research finding of a potentially dangerous health effect to consumers who are currently unknowingly exposed to nanoparticles in their sunscreens or cosmetics," according to Friedman.

Julia A. Moore, deputy director of the Project on Emerging Nanotechnologies, felt that both the Laing and Friedman studies illustrated the need for stepped-up public education and information efforts on nanotechnology. "The need to engage the public in a dialogue about nano's potential benefits and risks, and how government proposes to manage them, has never been greater or more propitious. Without such an effort, nanotechnology's benefits could be lost in a sea of scary headlines and confused publics." 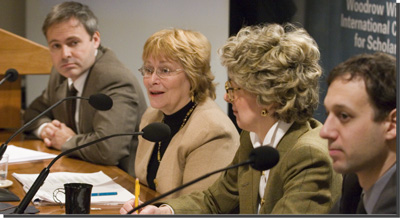