"We cannot manage our planet if we cannot manage our forests," said William Sommers, a research professor with the Center for Climate and Society at George Mason University. Sandra Brown of Winrock International and David Cleaves, climate change advisor to the chief of the U.S. Forest Service, joined Sommers and moderator Thomas Lovejoy, professor at George Mason, to discuss the impact of climate change, carbon, and fire on the world's forests.

"We cannot manage our planet if we cannot manage our forests," said William Sommers, a research professor with the Center for Climate and Society at George Mason University. The event, which coincided with the International Year of Forests, was the fourth in a series co-sponsored by George Mason University and the Environmental Change and Security Program on Managing the Planet. Sandra Brown, director and chief scientist of the Ecosystems Services Unit at Winrock International and David Cleaves, climate change advisor to the chief of the U.S. Forest Service, joined Sommers and moderator Thomas Lovejoy, professor at George Mason, to discuss the impact of climate change, carbon, and fire on the world's forests.

"Forests have evolved over Earth's history," said Sommers, with fire being a "constant shaper" of this evolution. Humans first used fire as a tool about 400,000 years ago, and around 10,000 years ago, we began using fire for agricultural purposes, which, Sommers said, can be considered the beginning of forest management. 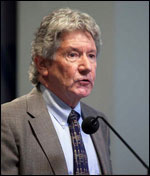 The resulting carbon dioxide (CO2) emissions have been an important consequence of this human intervention, Sommers said. CO2 emissions have an "exceptional persistence" in the atmosphere, which, explained Sommers, "commits us to irreversible warming over the next 1,000 years."

In order to counteract these warming effects, a replacement for the "business-as-usual" approach is needed, Sommers said. If not, he warned, CO2 concentrations could reach a thousand parts per million by the end of the century: "It has been 30 to 100 million years since Earth experienced that level of atmospheric CO2 concentration, and Earth was extremely warm at that time."

"Fire remains a critical element of the earth's system and is highly sensitive to climate change," said Sommers. The potential feedback relationship between fire and climate change was illustrated in dramatic fashion in the summer of 2010 with the outbreak of wildfires in Russia after the hottest summer temperatures on record.

Time is running short, Sommers warned, to answer the question of whether humans can anticipate and respond to climate change and manage forests in a sustainable manner.

"Logging can be well-planned and well-designed or maybe not so well-planned," said Brown as she spoke about her research on the logging industry in the tropics. Sustainable forest management in the tropics is still "a bit of the wild west" in some countries, though the situation is improving slightly, she said.

One way to improve management and reduce greenhouse gas emissions would be through the REDD+ (Reducing Emissions from Deforestation and Degradation) program of the United Nations. REDD+ can provide incentives, Brown said, for people to come up with useful innovations and improvements to forest management. But, she warned, "the longer we keep waiting, [the more] forests are diminishing." 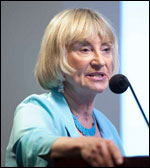 When a tree is felled, Brown said, there is a lot of collateral damage. An estimated one billion metric tons of CO2 are released every year from logging in the tropics of Africa and Latin America, she explained. One-half of these emissions are from the harvesting itself and the other half is from incidental damage and infrastructure, such as from the skid trails and haul roads needed to transport the logs out of the forest.

Therefore, it is important for all possible reduction methods to be taken, Brown said: "Where we have opportunities to produce goods with reducing emissions, we need to take those opportunities. We just can't keep thinking, ‘That's too small to worry about.' If there's what we call ‘low-hanging fruit,' why not go for it?" 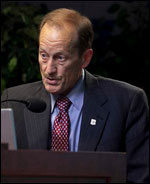 The country's forests are changing and we have already seen whole system change, Cleaves explained. For example, climate change has altered snow cover patterns leading to the decline of over half a million acres of yellow-cedar forest in Alaska.

Other threats facing U.S. forests include disease (such as white pine blister rust), increased variability of fires, increased housing growth near forested areas, and the possibility of forests turning from carbon sinks into carbon sources. That is to say, as forests are destroyed through fires, clearing, or disease, they release back into the environment the carbon they have absorbed.

Risk must be integrated into the decision-making process of the agency, and to this end the Forest Service has created the National Roadmap for Responding to Climate Change. But in order to meet these climate change challenges, Cleaves said, "we have to get moving."