A “Ministry of Truth” in 2021: Fighting Fake News the Old-Fashioned Way

The Russian government has seen fake news and rumors as an imminent threat to be eliminated by the State for much of its history. From 1935-1953, Soviet citizens were severely punished for spreading rumors: only after Stalin’s death did those prosecutions mostly stop. Now, almost 70 years later, this practice has been reborn in a different way. At the beginning of the COVID-19 pandemic, Russian authorities started to use two new laws against people who spread fake news about the epidemic. But who was punished, and why does one type of rumor become a matter of investigation and others, like those about anti-vaccination do not? George F. Kennan scholar Alexandra Arkhipova examined this selective policy against misinformation in her lecture.

“Now we (Russia) have two laws which allow the police to punish people for spreading any types of rumors and in both of these laws the information is very unspecific – anything can be declared to be dangerous.”

“During the last two years, in at least 15% of cases, people who could be called ‘fake news spreaders’ were forced to apologize publicly, not to the people—but to the governmental officials, to the police, to the government, and also to Putin… These videos were usually shot at the police station and then - under false pretense - were posted on the website of the minister of internal affairs and were sometimes broadcast on local television.”

“According to this law, they (the Russian government) are trying to punish individual users, but they are also trying to force platforms not to publish information. They put a lot of pressure on YouTube and on Facebook… they force them to delete videos.” 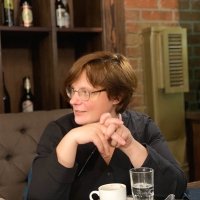