Peace At Any Price? New Evidence on Lyndon Johnson's Final Efforts to End the War in Vietnam.

Kent Sieg, Editor of the Foreign Relations of the United States volumes on Vietnam during the Lyndon B. Johnson Administration will present new evidence from the US archives. 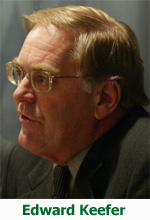 Organized by the Cold War International History Project, the event brought together Kent Sieg, editor of the volumes, Edward Keefer, General Editor of the Series, James Hershberg, Associate Professor of History and International Relations, The George Washington University, and Daniel Davidson and Peter Swiers, former Department of State officials and members of the US delegation to the Paris Peace Talks for the launch of Volumes V, VI, and VII of the Department of State, Office of the Historian's Lyndon B. Johnson Foreign Relations of the United States (FRUS). The event, part of an ongoing series of events organized by CWIHP with the Department of State, highlighted some of the most important issues arising from the documents declassified by the Department of State. Mr. Davidson and Mr. Swiers discussed their experiences during the Paris talks and their recollections of some of the most important moments and personalities involved in the decision making process.

Based on exhaustive multi-archival research, the LBJ Vietnam volumes paint a detailed, almost day-by-day and hour-by-hour picture of decision making in the Johnson administration. For the first time in the FRUS Series, telephone conversations between the President and his immediate collaborators or between the President and the 1968 presidential candidates are transcribed in full in the volumes. More so than any other documents, those telephone conversations help historians distinguish the decision-makers' personalities.

Johnson Administration officials failed to fully understand the situation in the Vietnam War, falling victim to overly optimistic interpretations of the situation and getting trapped into security-dilemma spirals. Drawing parallels between the current situation in Iraq and the situation faced by Johnson in Vietnam, Kent Sieg gave the audience an overview of the policy decisions and hurdles faced by LBJ during his last two years in office.

Documents, however, do not tell to full story. Present during the first year of the negotiations in Paris, Peter Swiers and Daniel Davidson assisted Ambassador-at-Large Averell Harriman during trying times. Offering personal details of the US participation in the negotiations, the two former officials stressed the unity of the American delegation in Paris. The start of the negotiations brought on a feeling of euphoria among the observers around the world. Even the North Vietnamese commanders had to deal with the new found hope of a speedy resolution. Expected to end quickly, the negotiations nevertheless dragged on through the end of Johnson's term. Hawk and doves, none of the US participants were ready to end the war then on North Vietnamese terms the two veteran of the peace negotiation concluded. 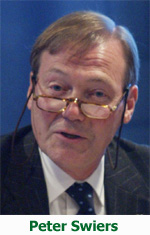 James Hershberg praised the volumes as a monumental work but questioned the suspect lack of SIGINT intercepts, especially concerning the claims that the South Vietnamese had been discussing stalling the negotiations in Paris until Nixon gained control of the White House. New evidence from foreign archives can help resolve lingering questions about America's history in Vietnam. The secret Polish peace initiative in 1966, codenamed by Washington "Marigold" is one case in which previous statements by USG officials go counter to Polish accounts.