This event has been postponed.

This event has been postponed.

As the 23rd Secretary of the male-dominated US Air Force, Deborah Lee James led a force of 660,000 people and managed a $139 billion budget—larger than the GDP of more than 120 countries. She was only the second woman to lead a US military service.

Secretary James became the “CEO” of the Air Force in the midst of unprecedented political dysfunction in Washington. During her tenure, she faced down enormous challenges, including preparing military women and men to fight terror in the Middle East, combatting sexual assault in the military, and responding to a crisis in the nation’s nuclear enterprise.

In Aim High: Chart Your Course and Find Success, Deborah James shares her personal and professional challenges, outcomes, strategies for success, and the problem-solving principles she used to overcome the daunting pressures, threats, and challenges that come with rising to the top of the US Armed Forces. 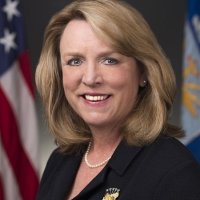