On Sept. 22, the Brazil Institute hosted the launching of the Pew Research Center's Global Attitudes Project results for Brazil, one of the 22 countries surveyed this past spring. The report, "Brazilians Upbeat about Their Country, Despite Its Problems," emphatically showed that "Brazilians are increasingly confident of their role in the world," said Richard Wike, associate director of the Pew Global Attitudes Project.

Juliana Menasce Horowitz, senior researcher at the Pew Research Center, explained the importance of this survey as Brazil prepares to elect a new president. A full 50 percent of Brazilians are satisfied with national conditions overall (giving Brazil the second-highest score in the world for this question, after China), and an astounding 76 percent of the population approve of the government's handling of the economy - meaning that the government even has the support of many who have a negative opinion of the nation's current conditions. According to Horowitz, Brazilians are "upbeat and very positive, especially in terms of the economy," which should aid the incumbent Workers' Party candidate, Dilma Rousseff, in the October elections. The country also has positive views of President Lula and of some key groups and institutions: the media, religious leaders, the military, and the national government are all viewed positively by majorities of all income groups. The police also received a majority approval rating overall, but many say their influence on the country negative. The Lula administration's flagship Bolsa Família program received especially high approval ratings.

Despite the strong optimism displayed in the survey, Brazilians are realistic about their country's challenges: large percentages of the population believe illegal drugs (85 percent), crime (83 percent), corruption (79 percent), and social inequality (66 percent) are "very big" problems. Respondents living in rural areas are also more likely to see infectious diseases and pollution as serious concerns. Furthermore, black respondents are more likely than mixed-race or white respondents to see social inequality as a major issue. While Brazilians solidly embrace gender equality, a plurality of respondents, including 51 percent of women, believe that men have a better life than women, meaning there is still work to be done. Most Brazilians view positively the election of a woman president (70 percent of men and 71 percent of women), which means Rousseff should face very little resistance due to her gender. By comparison, when Americans were asked the same question in October 2007, with a reminder to put aside their feelings about then-candidate Hillary Clinton, only 33 percent said it would be good to elect a woman president while 55 percent said gender did not weight in their choice.

As far as Brazilians' view on foreign affairs, the Pew Research survey found that most see their country as a rising power. While only 24 percent view Brazil today as a global leader, 53 percent say it will eventually be a world power, and 80 percent believe their country to be generally liked. Majorities of 62 and 52 percent express a favorable view of the United States and China, respectively. Presidents Lula and Obama are the only ones receiving majority approval among leaders tested in the survey. No less than 70 percent of respondents say they lacked confidence in Hugo Chavez and only 13 percent give him a positive rating. Chavez also receives low favorability ratings in Argentina and Mexico, the two other Latin American countries included in the survey. Lula is viewed more highly than Chavez in both. Brazilians are the most concerned population in the survey about global climate change - 85 percent viewing it as a serious problem. The United States at 37 percent and China at 41 percent are near the bottom of the list. 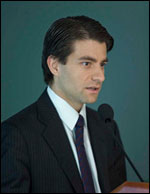 Ricardo Mendes, managing partner of Prospectiva Consulting, argued that the results showed that "Brazilians are very pragmatic," since approval ratings of their political leaders, and Lula specifically, reflected favorable views of the economy. He also noted a broad contradiction between public opinion and the Lula administration's foreign policy - 87 percent believe growing trade and business ties with other countries is good for Brazil and 75 percent agree that Brazil is best off in a free market economy, meaning that protectionist, Chavista impulses would not find broad popular support. Furthermore, a strong majority expresses a negative opinion of Iran and its nuclear program. Large numbers support stricter sanctions against the country, whereas Lula has tried to reach out to Ahmadinejad. He argued that it would be more resonant with public opinion to strengthen ties with the United States and China.

Brazil Institute Director Paulo Sotero pointed to the strong support for the country's increasing international integration and expanding international trade as indications that the Brazilian government will continue to be challenged to advance its interest and leadership regionally and globally. Sotero said this will inevitably require the country to face and pay the "costs of leadership." He highlighted as particularly positive the fact that a mere 5 percent of Brazilians believe that international factors or players are responsible for their country's economic problems: 57 percent say the government is the most to blame, while 23 percent say that Brazilians themselves are responsible. Sotero argued this is evidence that the Brazilian electorate has reached political "maturity", and a sign that elected leaders will be increasingly under pressure to take responsibility for the consequences of their actions.