A Review of Brazil's Environmental Policies and Challenges Ahead

Stressing that sustainable development, not just conservation, must be the focus, Izabella Teixeira, Brazil's minister of the environment, discusses the challenges and goals of her ministry in the coming years.

A Review of Brazil's Environmental Policies and Challenges Ahead 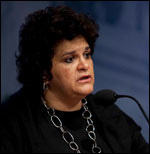 Stressing the need for concrete, tangible institutional policies, Izabella Teixeira, Brazil's minister of the environment, discussed the challenges and goals of her ministry in the coming years. Sustainable development, not just conservation, must be the focus, and doing so requires bringing lots of different players to the table– taking into account not only environmental but also social and economic agendas. To do this, she argued, one must take the rather ephemeral and hypothetical notions of environmental stewardship and put them into the realm of a practicable, institutionalized framework, built on a social pact that engages with all sectors of society.

The foundation of sustainable development and environmental policy must be biodiversity, according to Teixeira. Central concerns, such as food and energy security and combating climate change, all rely on a diverse array of natural resources. These need to be conserved, but they must also be developed in a responsible, sustainable way. A legal international framework toward this end, about access to genetic resources, has yet to be implemented. Developing and developed countries need to find a middle ground on allocating the benefits that accrue from the use of genetic resources found in areas such as the Amazon, and this agreement must then be linked into existing political institutions.

Teixeira noted the strides Brazil has made toward protecting its environment– including having set aside the equivalent of 70 percent of all protected areas in the world in 2009 and the establishment of the Amazon fund. Nevertheless, it must continue to pursue and maintain these efforts, such as protecting and maintaining these nature preserves, not just establishing them. Thus, creating a program that pragmatically implements international goals in a national context is an ongoing process, and countries like Brazil now need to focus on the "how" of implementing these goals, rather than just the "what." 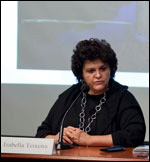 She also highlighted the complexity of formulating environmental policy that integrates all the various points of view that a successful policy must take into consideration. At recent meetings to discuss transitioning to a low-carbon economy, 17 different cabinet ministers had to be present to coordinate government positions and policies. The complexity is due in part to the need to create alternatives, not just to prevent certain activities. For example, one must not only use legal enforcement to stop illegal deforestation, but needs to create paths to legal, sustainable logging. Once again, attempting to balance environmental, social and economic concerns is difficult, to say the least, but crucial for long-term effectiveness.

Also a unique challenge for Brazil is the natural diversity that exists within such a large country. While much of the attention paid to the environmental goes (rightly so) to the Amazon, there are many other biomes and local environments that must be taken into concern, Teixeira observed. The cerrado, Brazil's enormous savanna, requires a different strategy than the Amazon, specifically in addressing desertification, which is different than the coastal Atlantic forest. Furthermore, urban areas need their own environmental policies that can take into account issues of human development and population density.

To illustrate the need for an inclusive, well-thought-out policy, Teixeira discussed rather frankly the controversy surrounding the recent proposed amendments to the Forest Code. She argued that the proposal makes blanket changes that do not take into consideration differences of biomes, differences between large agribusinesses and family farms, and between historic, settled communities and recent developments. The implications of this proposal, according to the minister, would be enormous social costs. Teixeira said she believes that it would be virtually impossible to enforce amended Forest Code, if it was approved by Congress. She used this example to underscore her role in offering legislative alternatives that seek to provide a more nuanced, and ultimately more effective, institutional framework that can use Brazil's many natural resources to help its population to the greatest extent possible.

Drafted by J.C. Hodges and edited by Paulo Sotero. 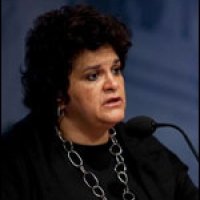