Rule of Law, a Linchpin of U.S. Foreign Policy: A Conversation with Senator Ben Cardin

The rule of law - essential to combating corruption, ensuring justice, and promoting economic prosperity - has been central to U.S. foreign policy for decades. Nevertheless, the U.S. record in this regard has been less than stellar, and promoting the rule of law abroad often does not translate into meaningful reform on the ground. What can the U.S. do to better support the rule of law around the world, and why is it in the country's critical interest to do so? Senator Ben Cardin led a conversation on this topic, followed by a report launch and panel discussion.

The rule of law - essential to combating corruption, ensuring justice, and promoting economic prosperity - has been central to U.S. foreign policy for decades. Nevertheless, the U.S. record in this regard has been less than stellar, and promoting the rule of law abroad often does not translate into meaningful reform on the ground.

What can the U.S. do to better support the rule of law around the world, and why is it in the country's critical interest to do so?

Senator Ben Cardin led a conversation on this topic, followed by a report launch and panel discussion.

“As someone who also monitored elections around the world---and almost went to the election in Lebanon a couple weeks ago, but I had a schedule conflict---I have firsthand experience that the rule of law is crucial to building political capacity and providing tools for good governance. It is the foundation of good governance.”

“What makes America the unique nation in the history of mankind are the values that we bring to the table. The respect for rule of law, that everyone is accountable, that we believe in diversity. We believe in the democratic institutions. We believe in fighting corruption. That’s what we stand for. That’s our hallmark. That’s our gift to mankind and that is looked upon internationally for hope. People all over the world look toward America and are encouraged by it.”

“We need presidential leadership. It starts with the President of the United States, and the president must make it clear that this is the bedrock of America’s engagement globally, and he has to make that clear in his language and in his policies. Your report gives us the ability to have this discussion. I hope it will lead to constructive change here in America.”

“This issue of promoting rule of law and good governance has been key to my work over the years in the region and I’m delighted that some of my colleagues here from the Wilson Center, Will Pomeranz and Michael Kugelman, who also work on these issues, but in other regions are going to join us on this panel.”

“The study looks at the most challenging cases where U.S national security interests and democratic values are the most threatened. These are states where international organized crime, international terrorism, and corrupt authoritarian rule are challenging the very existence of partner countries that receive U.S aid.”

“During the Obama administration, promoting the rule of law was subordinated to other goals: advancing democracy, protecting human rights and enabling good governance. USAID’s rule of law office was downsized and merged into the office that dealt with governance. Along with reduced priority came a sharp drop in financial resources devoted to aiding foreign courts and prisons. Outside of these very, very large programs in Iraq and Afghanistan, funding for judicial assistance dropped from several billion dollars, down to over a billion dollars in 2013, down to less than $500 million in 2016.”

“We found that U.S rule of law assistance still lacked a common policy, doctrine, strategy and coordinating mechanism. There was no strategic and commonly agreed goals and objectives. And still agencies undertook a collection of projects which reflected the annual choices of policymakers in Washington, embassy officers and partnered governments overseas.  “

“In the Central American countries, we found that U.S rule of law programs were generally well received but almost universally deemed inadequate in several respects. Perhaps the most telling comment was that the programs were not strategic in nature. That is, they were not comprehensive enough to make a difference. They were valuable, appreciated, helped on the margins here and there, but they were not designed to help establish an enduring rule of law system that would allow the countries to escape the grip of deeply embedded criminal elements, and restore the viability of democratic institutions.”

“In Azerbaijan, we discovered that the robust U.S rule of law programs that were administered in that country were largely co-opted and compromised by the government that had eviscerated democratic institutions and extinguished the democratic rule of law by exercising authoritarian control over the justice sector.”

“Should it be a priority again? Yes, it needs to be a priority and I think concerted efforts have been made, were made in Russia, but obviously Mr. Putin is no longer interested in attempts by the United States at least, to influence and to assist rule of law development in Russia.”

“When you emphasize the notion of addressing institutional issues, this is not only critical in a place like Russia or Ukraine, but you also have to take in account that the institutional balance that we perceive as being necessary simply isn’t present and it hasn’t been present for centuries. That indeed if you want to begin to reform legal reform in Russia and Ukraine. In fact the most important institution that needs to be reformed is the prosecutor’s office and it is the institution that President Poroshenko has been most reluctant to reform because it is essential to his ability to maintain political control.”

“Access is another big problem. In Kabul, you have well-intentioned folks, that want to do important works with rule of law reform and so many other things, but they’re barricaded in the embassy right now.”

“In Afghanistan, we work very closely with the government there. It’s a friend of the United States, but this is a government that is seen by much of the population as unpopular and even illegitimate, so the question is: “How do you work with partners in countries overseas, including allies, friends like Afghanistan, how do you work with them to undertake rule of law reform when the partners themselves are much discredited by much of the population.”

“Appropriators on the Hill have been asking these very same questions in the last couple of years. In a macro sense, it’s challenging to attribute any one particular rule of law program by any one donor in order to determine success or failure of a project. In Latin America, donor intervention has helped define the roles and responsibilities of judges, prosecutors, defense attorneys and police with the introduction of adversarial principles into criminal codes and criminal procedure codes.”

“In the future, rule of law development work will not be what we’ve traditionally seen as stand-alone programs or state projects. Instead these programs will have targeted lenses, such as fighting impunity and anti-corruption, the work that we have been seeing CICIG and MACCIH in Guatemala and in Honduras and improving juvenile justice in order to prevent recidivism.”

“There’s no silver bullet to rule of law development work. Evidence-based information from a 2011 World Bank’s world development report states that it takes 40+ years for justice sector reform to fully institutionalize in a country.” 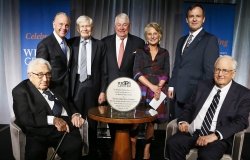