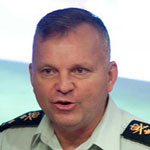 The sentiment among some Americans that Canada prioritizes economic issues over security concerns is not true, said Lieutenant-General Walter Semianiw, Commander of Canada Command. In contrast, he said, Canada has made significant investments to enhance its armed forces in an effort to better secure Canada and North America. Semianiw went on to discuss the Canada First Defense Strategy, as well as ongoing efforts to enhance bilateral and trilateral security relationships to secure North America and more effectively respond to natural disasters at an event hosted by the Canada Institute.

Semianiw outlined the six roles of the Canadian Forces laid out in the Canada First Defense Strategy. Four of the roles, he noted, are aimed to secure Canada and the North American continent. These include: (1) Conducting daily and continental operations, including through NORAD; (2) Providing support for prominent international events in Canada (such as the 2010 Olympics); (3) Responding to terrorist attacks; and (4) Providing support to civilian authorities as needed during crises such as natural disasters. The two other roles of the plan, he said, are international aims and state Canada's desire to lead and/or conduct an international operation for a sustained period of time and deploy forces to respond to crises anywhere in the world.

Semianiw described the first four roles as the non-discretionary must-win "home game" and noted that 73 percent of Canadians support the use of Canadian Forces to provide relief during natural disasters (Canada has no National Guard as does the United States). He said that as Commander of Canada Command, he has the ability and authority to rapidly put together the necessary personnel and equipment needed to respond to an incident anywhere in Canada. The Canadian Forces rapid response to recent flooding in Manitoba and Quebec, and forest fires in northern Saskatchewan, demonstrates both the effectiveness of the current Canadian Forces and need to maintain a capable force within Canada, maintained Semianiw.

The Value of Partnerships

Semianiw noted that disaster response planning and preparation extends beyond partnerships with other agencies within Canada and increasingly involves cooperation with U.S. and Mexican agencies to better secure North America. Canada and the United States, he said, already benefit from a closely integrated defense relationship and one that will only benefit from such initiatives as "Beyond the Border"—a declaration made in February 2011 by Prime Minister Harper and President Obama to pursue a perimeter approach to security. Canada is also participating in military to military talks with the United States and Mexico to discuss the shared defense of North America, most recently at a whole-of-government trilateral seminar on North American cooperation held in Mexico at the Center for Naval Studies in April 2011.

During the question and answer period, Semianiw maintained that the Canadian Forces' operational approach to the Arctic will be informed by science. He stated that that Canada Command is developing a "threats and hazards" framework in an effort to make informed decisions on where best to deploy Canadian Forces in the Arctic. The Canadian government, said Semianiw, is also working to forge public-private partnerships in order to develop communication and other critical infrastructure that would be essential to maintain a Canadian presence and secure Canada's North.