South Africa’s Policy Challenges in the Next Four Years

This event featured a presentation by Reverend Frank Chikane on the issues that will face South Africa over the next four years. Chikane has served as Director General for every South African President since 1994 and brings a unique “insider’s” perspective and unparalleled experience with regard to governance in South Africa.

South Africa’s Policy Challenges in the Next Four Years

Thoughts for the Future

“We need to change the country and the economy in a way that everybody will be a beneficiary of it” maintained Reverend Chikane. Together with smart politics and economic and social policy, South Africa may well be in a position to confront its challenges at home and abroad.

Why Focus on the Next Four Years?

“[I’ve] had the chance of interacting with [Reverend Frank Chikane]…in terms of the resolution of the Burundi situation coming out of the Orisue dispute, Frank being the President’s officer at the time was very helpful,” stated Steve McDonald, Director of the Africa Program and the Project on Leadership and Building Capacity.  Reverend Chikane, former Director General of the South African Presidency, began this discussion by emphasizing that his country’s domestic and foreign policy needed to be assessed while bearing in mind the implications of the African National Congress’s (ANC) reelection in 2012. Chikane said that it is extremely important to examine the policy-making process in South Africa, in particular how starting from the basis of injustice that his country must realize the objectives outlined in the constitution’s preamble to create a “South Africa [that] belongs to all who live in it.” In sum, Reverend Chikane sees an opportunity to establish “a just, non-racial, non-sexist, democratic society.” If this happens, “a united and democratic South Africa will be able to take its rightful place as a sovereign state in the family of nations.”

Although apartheid was abolished in 1994, South Africa still grapples with its tragic history regarding race and poverty. When apartheid ended Chikane said the South African leadership set policy objectives which were designed to steer the country toward a non-racial democracy, heal the divisions of the past, and improve the quality of life for all citizens through the social justice, and fundamental human rights. The Mangaung Conference hosted by the ANC in December 2012 evaluated the progress that South Africa has made on reaching these policy goals and acknowledged mixed results. 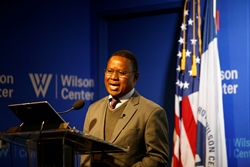 Chikane lamented, “we have achieved as much as we can, but not as much as we could.” Within the next four years, a national conference will be held wherein binding policies will be adopted and the Mangaung Political Framework will be sent to government officials for implementation. The ANC’s current policy framework is tedious, contributes to lags in decision making and miscommunication. Its weakness may stem from the fact that it derives from a party process, as opposed to a systematic one that involves varying levels of the community; from the regular citizens to those who are explicitly familiar with the political process—creating a lack of cohesion in the creation of new policies. Chikane stated “the greatest challenge is to change [the public image] so that the face of apartheid is no longer clear,” emphasizing that the three main obstacles for South Africa are poverty, unemployment, and inequality and that a mere 6% growth is sufficient to effectively combat these scourges. He went on to warn against jobless growth (i.e. economic growth without job creation) that could precipitate economic stagnation.

Chikane listed specific policy interventions that could address the aforementioned problem areas. He said that developing relevant skills (e.g. management capacity) so average individuals can be a part of the economy is integral. Chikane said, “we need to unlock the entrepreneurial capacity of people that has been suppressed.” Further, he spoke of the importance of a social compact. Different sectors of the economy need to work collaboratively in order to achieve skills acquisition and sustainability. 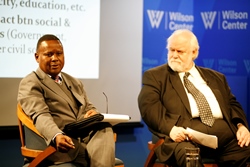 This will create a compact between social and international partners and engender a thriving job market as the procurement of skills will allow for South Africans to receive higher wages for better jobs.  At present, indigenous capital in South Africa, on a meaningful scale, is not often invested into the domestic economy. Instead, individuals “sit” on their money. The Reverend also emphasized the necessity of including young people in the decision-making process, as failure to do so could catalyze large-scale unrest. He said “the greatest challenge I want to pose is that the constraints frustrate young black people. Because if after 20 years, the conditions have not changed, you are bound to get a revolt… we should not be surprised because they are trying to solve a problem [at which] we as adults have failed.” He closed his remarks by harkening back to the imperative of fixing the economy as critical to facing the impending challenges.

In response to questions regarding the effects of the growing gap between the black South African middle class and their lower-income counterparts, as well as the emphasis placed on a growth rate at 6%, Chikane described the current situation with the large black middle class. Their contrasting political perspective creates a dissonance among them and the rest of the population. He also speculated about the possibility of social grants playing a significant role in leveling the playing field between the rich and poor. Social grants depend on the state of the economy, but the injection of capital, it is thought, would help produce the highly sought-after 6% growth. Local governments do not have the capacity to absorb large grants as the best educated leave the provinces in search of opportunities in the cities. “If you grow at 6%, you will need a [specific level of skills and capital]. With 5% growth, there aren’t enough skills. You need a very comprehensive strategy to meet all of the dynamics and challenges to be able to carry the economy to a certain level. You have to have money to attract skilled people to the rural areas to give rural people the same quality of life. It’s not just policies, it’s really strategies.” Achieving 6% growth will come through the cultivation of practical skills, either from local South Africans or by nurturing and importing skills from other African countries.