The Asian Financial Crisis, 20 Years On: A Conversation with Lawrence H. Summers

Bangkok’s decision in 1997 to float the baht after failing to support the currency from speculators led to a financial crisis not only in Thailand, but across Asia, most notably Indonesia and South Korea. But is Asia now better prepared for another financial crisis? Join us for a conversation with former U.S. Treasury Secretary Lawrence Summers, and former U.S. Executive Director of the IMF Meg Lundsager to discuss the resilience and the risks facing Asian economies.

The Asian Financial Crisis, 20 Years On: A Conversation with Lawrence H. Summers

Bangkok’s decision in 1997 to float the baht after failing to support the currency from speculators led to a financial crisis not only in Thailand, but across Asia, most notably Indonesia and South Korea. Fears grew about the contagion effect of the meltdown spreading worldwide, as emerging market currency values dropped, asset prices plunges, and private debt grew in most of the Asia-Pacific region. Supported by large loans from international financial institutions including the IMF and the Asian Development Bank as well as individual governments, Asia has not only bounced back from the crisis but it now flourishes as the world’s most economically dynamic region. Two decades since the crisis, countries have enhanced their financial oversight, built up their foreign currency reserves, and have dealt with non-performing loans. But is Asia now better prepared for another financial crisis? In this conversation, former U.S. Treasury Secretary Lawrence Summers and former U.S. Executive Director of the IMF Meg Lundsager discussed the resilience and the risks facing Asian economies.

Click here to read a full recap of the event on our blog.

"One of the important lessons that skilled managers and leaders learn is that it's usually easier to create a new thing than to change an old thing."

"I think vacuums get filled – and we seem to be creating a vacuum in the economic, in the broad economic diplomacy area. There hasn't been a moment when there has been so little American commitment to collaborative enterprise in the economic and financial area and I can't believe that that vacuum will not get filled."

“I think you have to say that this is a moment of unusually high geopolitical risk which is not priced into markets to any appreciable degree. Therefore, markets are at risk of changing due to geopolitical risk.”

“When people see a big structural problem in one house in a neighborhood, it's natural to ask if there are similar problems in others – and people found similarities between the Thai situation, the Indonesian situation... and ultimately the Korean situation.”

“We have not seen in the hundred years since Woodrow Wilson gave that speech [to Congress outlining his 14 points]... the kind of narrow- mindedness in approach to the global economy – that comes with the denial of global community, even as an aspiration – that we're seeing at present."

“[It] looks too much like a bipartisan renunciation of the aspiration to collective reduction in trade barriers – something that I think is very, very foolish for the United States, given that we have already removed most of our trade barriers. It's not that the 11 countries that are going to go ahead with the TPP are going to have significantly less access to the American market than they would have if there had been the TPP."

“Chinese support will come with conditionality, but that conditionality will be less based on economic theories of what's important for the countries to succeed and more based on China's broad nationalist interests."

“An irony of it all is that the more alarmed one is in a long-run sense about the threat that China poses, the more the kind of policies that we are pursuing are a mistake."

"I think we are long past the day of 'responsible stakeholder' as a plausible strategic concept for what we want to see China become."

“In general, I think countries will desire to provide for more self-reliance than they had before.  I am skeptical, given the magnitude of long-standing historical resentments, about the depth and thickness of any institutional arrangements that will form in Asia."

“The one thing I remember [in] putting together the whole response [to the Asian crisis], was that the New York Fed was part of encouraging the U.S. banks to maintain their lines of credit that would allow trade to continue, because as soon as the rush happened, all the institutions wanted to just close off all those constantly rolling-over lines of credit, financial trade, and other short-term transactions. So it was a multifaceted response that also involved the U.S. government trying to get some funding out of Congress.”

“My sense is still that the Chinese want the IMF to be a successful institution. And they’ve recognized the same thing you’ve said: imposing tough love – that gets to be a real ugly bilateral relationship... It’s much better for the IMF to do it through a collective [effort with] all the countries. My sense is that the Chinese are still very much vested in the IMF and recognize the benefits of having the IMF-imposed conditionality. One reason I say this is because the Chinese have always been very focused on supporting strong economic programs at the IMF… where, admittedly, they don’t have a controlling position."

"A lot of what’s going on in the Belt and Road is not foreign aid. The Chinese are very clear about that. It’s investment, and it’s loans. And that means the Chinese entities expect to be paid back. We know in a lot of these countries, they’re not going to be able to pay it back. Even that wonderful infrastructure improvement is not going to generate the kind of higher government revenues that are going to allow these countries to meet these payments… And that’s why I think [that] in the end, China – at least those parts of the Chinese government that understand how these international relationships work and the international institutions – are going to realize they need the IMF, the World Bank, and others, to help put that back together.”

“In all my years at the IMF... the other directors didn’t really complain about U.S. current account deficits [or] the U.S. position. They might scold the U.S. on fiscal one time or another but basically they liked the fact that the U.S. was still very strong on the import side, helping their economy.” 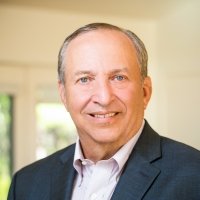