The Elusive Political Consensus on Peace in Colombia: A Conversation with the Colombian Senate's Peace Commission

The Elusive Political Consensus on Peace in Colombia: A Conversation with the Colombian Senate's Peace Commission

Since taking office in August 2018, Colombia’s government has sought to devise new strategies to advance peace and security in a country long plagued by armed conflict and organized criminal violence. The tense electoral cycle was characterized by sharp divergences over both the 2016 peace agreement signed by then-President Juan Manuel Santos and the Revolutionary Armed Forces of Colombia (FARC) and ongoing peace talks with the National Liberation Army (ELN).  Despite lingering polarization, President Iván Duque has promised to forge unity over remaining implementation challenges and the future of dialogue with the ELN.

Political consensus around peace, however, has remained elusive. Duque has sought to balance his declared commitment to accord implementation with the desire of his own political coalition to modify certain aspects of the agreement or minimize their importance in the face of other economic and budgetary goals. The ELN talks remain suspended despite efforts to overcome the current deadlock.

In this context, the House and Senate Peace Commissions of the Colombian Congress represent unique fora for debate.  These bodies include legislators from diverse political parties and are increasingly engaged in the search for compromise over key issues related to peace and security.

Please join the United States Institute of Peace, the Inter-American Dialogue, and the Woodrow Wilson Center on Tuesday, December 11th from 9:00-11:00am for a conversation with three prominent members of the Colombian Senate’s Peace Commission. The event will be held in Spanish with simultaneous English interpretation and live streaming. To follow the conversation on Twitter, follow #ColombiaPeaceForum.

Please note: The event will be held at the United States Institute of Peace. 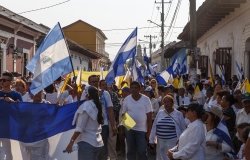 Publication
The United Nations and Nicaragua: Opportunities and Risks