The Human Dimensions of Environmental Security: Some Insights from South Asia

Adil Najam and Atiq Rahman explore whether poverty is a necessary condition for environmental degradation and resource scarcity to lead to conflict and insecurity.

The Human Dimensions of Environmental Security: Some Insights from South Asia

Is poverty a necessary condition for environmental degradation and resource scarcity to lead to conflict and insecurity? During this discussion, Adil Najam explored this question and presented the key findings that emerged from a regional research project that explored environment and security in South Asia. This project resulted in the recently published volume, Environment, Development and Human Security: Perspectives from South Asia (Najam, 2003). 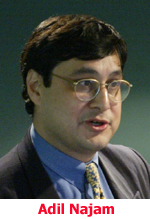 According to Najam, South Asia is the world's most impoverished region, with the highest rate of illiteracy and over 500 million people living below the absolute poverty line. It is also the most militarized region. Given this context, Najam argued that it is erroneous to think of security primarily as a matter of states and their military alliances and to define security as the safety of borders and institutions from outside threats. Rather, the true sources of insecurity in South Asia are non-military threats arising within the nations – such as poverty, social vulnerability, and ecological resiliency. He explained that in Bangladesh, "poverty is, and will remain the most important source of vulnerability and insecurity." As a result, Najam advocated that academics and policy-makers eschew the traditional conception of security and instead focus on human security and institutional failure.

Najam said that research on environment and security has helped expand the concept of security and enrich the debate. Yet, he asserted that poverty plays a more central role than has been acknowledged in linking environmental degradation and conflict. In Nepal, for example, "environmental stresses interact with societal vulnerability, disrupted development, and perverse markets to create an atmosphere of insecurity." Thus, he stated that chronic and structural poverty may be a required condition for the connection between the environment and security to be made. He also suggested that good governance is critical to ensuring resource availability and sustainable development. 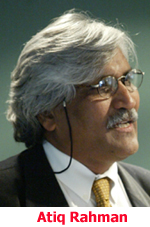 Atiq Rahman added to this last point and said that non-cooperation in South Asia around these issues has led to a general sense of distrust and insecurity in the region, institutional failure, slow economic growth, and corruption. He argued that regional cooperation is necessary to draw on the innovation present in South Asia. Rahman also reiterated the importance of concentrating on poverty reduction in the context of sustainable development, rather than narrowly focusing on environmental policy in order to increase human security in South Asia.