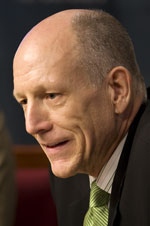 The International Watershed Initiative (IWI) represents a new way of thinking on how we treat fresh water basins, said Chuck Lawson, secretary of the U.S. section of the International Joint Commission (IJC), at a conference hosted by the Canada Institute in partnership with the Environmental Change and Security Program. Lawson explained that the IWI was created on the premise that water resources and environmental problems can be anticipated, prevented, or resolved at the local level. He was joined on the panel by Willem Brakel, senior adviser, IJC, to discuss the findings of the IJC's Third Report to Governments on the International Watershed Initiative.

Putting the IWI in Context

Lawson noted that the Boundary Waters Treaty of 1909, which established the IJC, was one of the first international environmental treaties and is one of the longest standing. Given that 40 percent of the Canada-U.S. border region is water, Lawson stressed that the IJC has been a crucial institution to manage bilateral water issues between the two countries and will remain important for the foreseeable future.

Nevertheless, said Lawson, the IJC's approach to managing water issues has evolved since its establishment over a century ago. At the Canadian and U.S. governments' request, the IJC published a report in 1997 exploring what role the Institution could play to help both countries meet environmental challenges of the 21st century. The report stated that in the past transboundary water issues, such as the quantity or quality of water in lakes and rivers, were studied in isolation from the rest of the watershed. The report concluded that this approach was insufficient and suggested that the health of the entire watershed must be considered when assessing a transboundary environmental issue. To help facilitate this transition, the IJC recommended the establishment of new international watershed boards.
Lawson said that plans to implement the new watershed approach were made in close collaboration with local stakeholders, provinces, and states.

An IJC report published in 2000 highlighted efforts to implement the IWI, which included the amalgamation of existing IJC boards in the Red River and St. Croix River watersheds, continuing efforts to combine the boards of the Rainy and Souris Rivers, as well as plans to strengthen the Red River Board. An additional report published in 2005, said Lawson, focused on enhancing the newly created watershed boards' capabilities of anticipating and responding to transboundary issues by expanding outreach and cooperation with local stakeholders; promoting the development of a common vision; employing a broader systemic vision to watershed management; and creating the conditions for the resolution of specific issues.

The successes achieved through the IWI have very much been a binational effort, said Brakel. He listed several IWI projects that have increased the capacity of policymakers to anticipate and respond to potential issues involving Canada-U.S. watersheds. Among the successes highlighted were the hydraulic modeling being carried out at the St. Croix River to better understand its water flow; the development of a flood mitigation strategy for the Red River; developing methods to better manage hydropower flows in the Rainy River in a way that does not interfere with fish spawning; and continued progress in mapping the Souris watershed.

Brakel noted that emerging issues, particularly climate change, reinforce the need for an integrated approach to watershed management. Climate change, he said, could affect a watershed in numerous ways, including shifts in forest species, changes in water levels, and warmer temperatures. In the area of water quality and health, an integrated approach is once again required to address the possible effects of urban sprawl, as well as monitor toxins and chemicals used in industry and agriculture that could make their way to fresh water sources.

Brakel maintained that the IJC will continue to craft a strategic vision for the IWI to ensure that projects and funding are evenly allocated across various watershed basins. In addition, he noted that much of the IWI's current work has involved hydrologic data collection, but hopes this will soon lay the foundation for more analytic modeling work to be completed. Brakel also said the IJC will continue to encourage its watershed boards to conduct more outreach to partner with local agencies, and seek funding for projects from non-federal sources, such as provinces, states, and NGOs.

He noted that the IJC intends to bring its watershed boards together for annual meetings in an effort to improve information sharing and best practices between boards. Finally, Brakel urged more involvement from Canadian and U.S. technical agencies, such as the U.S. Environmental Protection Agency and Environment Canada, in IWI projects.