Galia Golan discusses the upcoming March 17 Israeli elections and reflects on her latest book Israeli Peacemaking Since 1967: Factors Behind the Breakthroughs and Failures. Examining the Israeli-Arab conflict as an "intractable conflict," the book seeks to determine just which factors, or combination of factors, impacted on Israel's position in past peace-making efforts, possibly accounting for breakthroughs or failures to reach agreement.

Galia Golan, Professor of Government and Chair of the Program on Diplomacy and Conflict Studies at the School of Government, Diplomacy and Strategy at the Interdisciplinary Center Herzliya, discussed the upcoming Israeli elections and what stands in the way of a peace resolution between the Palestinian territories and Israel.

Golan began by stating that the upcoming Israeli elections fail to center around any of the major issues affecting Israel, such as violence in Gaza or the frequency of rocket strikes. She went on to say that there will be a “cycle of wars” unless an agreement is reached between the Israelis and Palestinians. She argued, however, that there are many factors standing in the way of a peace agreement. She stated that there are three possible outcomes of the elections: a center-right majority, a center-left majority, or a unity coalition. Regarding the possibility of a center-left coalition, Golan stated that while this did not seem feasible before, it is possible now. However, she argued that this coalition will be weak; although center parties will join the coalition, views on security issues will vary greatly and will lean toward center-right ideology. She continued by stating that a center-left coalition will be dependent on Arab votes, regardless of the fact that they are not directly involved in the government. Golan believes that although the odds are not in favor of a center-left coalition, it would succeed in bringing about serious negotiations.

Golan then argued that there are four pitfalls to serious negotiations. Firstly, there is mistrust between the Israelis and the Arabs. Golan stated that until Prime Minister Olmert, Israeli leaders were convinced that Arabs were unwilling to make peace or accept the legitimacy of Israel. This sentiment is central in the negotiations in which Israel had rejected peace in favor of national security on a number of occasions. Secondly, Golan argued that Israel’s mentality of “the land is ours” leads to an approach that Israel will "give" the Palestinians something rather than negotiating on the basis of interests. Thirdly, she stated that negotiations are often set up in terms of “give and take,” but the Palestinians believe they have already given up 78 percent of the land and have nothing more to give. Lastly, Golan concluded that “spoilers” mainly the settlers and the extreme right succeeded, aided indirectly by Hamas and Islamic Jihad.

Golan continued by presenting solutions to each of these problems. She stated that mutual recognition of two nation states with guarantees for minorities is needed. Furthermore, she commented that negotiations must proceed quickly so that spoilers do not have time to interfere. Golan concluded that Palestinians need to believe that a solution is possible and forthcoming while pressure may be needed to force the Israeli government to take the necessary steps to reach a resolution.

In the question and answer portion, Esfandiari asked whether or not foreign policy is a topic in the elections, referring to Prime Minister Netanyahu’s visit to the United States to discuss the P5+1 and Iran nuclear negotiations. Golan responded that although the Israeli public is supportive of Netanyahu’s speech, Israeli elites, such as high ranking military officials, do not support his visit and believe it to be risky for the nation. Golan concluded that Iran is not a primary topic in the elections, but that Netanyahu is attempting to make it one rather than focusing on more domestic issues. 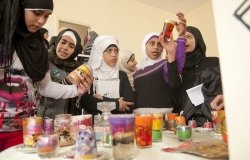 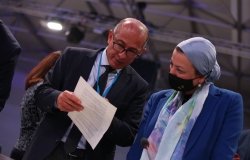