The Outlook for the Rule of Law in Mexico

The Wilson Center welcomed two ministers of Mexico's Supreme Court, Alfredo Gutiérrez Ortiz Mena and Eduardo Medina-Mora Icaza, to discuss the rule-of-law challenges being faced in the country as well as opportunities for further reform of the judicial system.

The Outlook for the Rule of Law in Mexico

Since Mexico's July 2018 election, there has been speculation about the new administration's approach to questions of rule of law in Mexico. The Wilson Center welcomed two ministers of Mexico's Supreme Court, Alfredo Gutiérrez Ortiz Mena and Eduardo Medina-Mora Icaza, to discuss the rule-of-law challenges being faced in the country as well as opportunities for further reform of the judicial system. Expert panelists also discussed prospects for reform as well as Mexico's shift to an adversarial system and the status of its implementation.

“In 2011, we had a second reform in the Constitution, and that reform changed the way we conceive individual liberties; we abandoned the idea of individual liberties that were given to us by the government and we adopted a system of human rights that are recognized by the government – human rights that are in the Constitution and in treaties where Mexico is a party. That opened the floodgates for a new dimension of litigation." “The Constitution is no longer seen in Mexico as a political document of political aspirations. It is seen as law, and it is justiciable law, and that has changed dramatically the way litigation is handled.” “We have had tremendous activity at the federal level with federal changes to the laws: we’ve changed from the traditional European criminal system to an adversarial system, we’ve changed our labor law rights, we’ve changed our telecommunications laws, we’ve changed our competition laws… You’d be hard-pressed to find an important law that is older than 9 years, 10 years.”

“A democratic state needs a very large police force in order not to use it – so you have to have control of a territory. We have an issue here in Mexico which is highly fragmented, coercive power of the State: over 2,000 police entities. The UK has 43 and British people think they have too many... For a country like Mexico having this institutional design, it's not a good one, I think. This is something that should be reviewed in the future." “If you ask ordinary citizens about judges, maybe their opinion is not going to be very high. They’re not thinking of justices in the Supreme Court or federal judges; they are talking about their ordinary lives, which is, essentially or typically, local judges.” “One of the most relevant challenges is to improve institutional framework for local justice.” 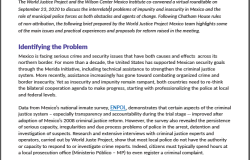 Publication
Rule of Law
Public Security and Impunity in Mexico: The Local Police as Problem and Solution