Trudeau, Scheer, and the Future of Canada: Canadian Election Special

The Canada Institute and the Canada-United States Law Institute (CUSLI) convened an in-depth discussion analyzing the outcome of the October 21st federal election. Leading U.S.-Canada analysts, former diplomats and business leaders addressed the implications of the election results for Canadian politics, Canada-U.S. relations, and Canada's engagement with the world.

A networking reception for event participants will follow from 4:00 – 5:00 PM in the Wilson Center Board Room. 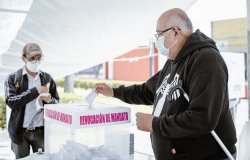