USG's Support for Free and Transparent Elections in the DRC

Against the backdrop of protracted instability in the eastern Kivu provinces and the new priorities of the UN’s stabilizing mission in the DRC, the country is set to hold important presidential and legislative elections in November.

USG's Support for Free and Transparent Elections in the DRC

Steve McDonald, Director of the Africa Program and Project on Leadership and Building State Capacity, The Wilson Center;

“As the Arab Spring turns into a long hot summer, Libya slips further into chaos, Egypt remains on tenterhooks, Iraq and Afghanistan present sustained challenges in transitioning to free-standing democracies, South Sudan’s birth is wrought with questions and violence, and now we hear of even London facing rioting and mayhem, there is not much space in the media or in our consciousness for another crisis or conflict.  Yet, one other country, long off the world’s radar, continues to garner the attention of us all… That country is, of course, the Democratic Republic of the Congo (DRC),” Steve McDonald, Director of the Africa Program, Wilson Center, asserted to open the discussion on the “U.S. Government Support for Free and Transparent Elections in the DRC.”  McDonald stated that “the world’s attention now turns to the election schedule for November in that country, because the elections are seen as critical to stabilizing the government and the country, and allowing it and its international partners to move forward in addressing the issues of violence, mineral exploitation and development of the country.  But, the question before us is will the elections provide an answer? Will the results be acceptable to the population of [the DR] Congo… and the key question overall is how will the parties, the protagonists to the elections behave the day after the elections?” 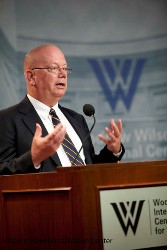 and training to equip Congolese election observers with the skills to work effectively whether in urban centers or the countryside. Of crucial consequence, he contended, was that the Congolese people and the election commission certify the results; their affirmation – as opposed to that of the international community – would represent electoral legitimacy. Transparency, the ability of candidates to campaign without being submitted to or engaging in violence or intimidation, and fair and equal access to state media for male and female candidates comprise the foundational bedrock of a credible election. Lastly, once the elections are over, a critical moment will be when the defeated candidates announce publicly that they accept the results. Ambassador Entwistle expressed delight in the fact that, on the ground, the Congolese people talk of the next election in 5 years, indicating an expectation that elections will be held in the future.  This complicates the intention of any person to subvert the process, which the Ambassador noted is a positive indicator that democracy is taking root in the DRC.

Regional Director of Africa for the International Foundation for Electoral Systems (IFES), Almami I. Cyllah, 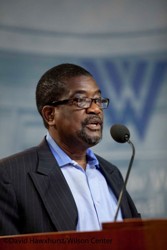 recalled the scope of the daunting logistical challenges that face a country the size of the DRC with a mere 6 months to prepare. In light of the recent constitutional amendments that have, in effect, eliminated multiple rounds of voting in favor of a single round, Cyllah expressed concern that people may be inclined to vote along ethnic lines. To counter this inclination, the international community must uphold its commitments to financially support the process while putting the community at-large and civil society in position of ownership. The election commission should produce a plan that addresses the stakeholders and ensures that they are an integral part of the process. The results of the elections must be announced and meet a minimum standard of credibility to guarantee legality of the process.  Preparation for the next election, he charged, starts the day after the results are announced. 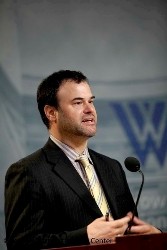 are necessary to facilitate the understanding of civil society and ordinary Congolese citizens that elections are a process - not an event - and should be treated accordingly. David Pottie, the Associate Director of the Democracy Program at The Carter Center (TCC), affirmed that the Center provides long-term support in the form of technical training in reporting, drafting public statements, and media relations for the government. One challenge he cited was the multiplicity of networks that will deploy observers who have partisan points of views and agendas. Pottie shared Entwistle’s assessment that TCC does not certify results; it is the electoral commission’s responsibility to certify results that are in compliance with the DRC’s international and constitutional commitments, agreements, and obligations.

US Ambassador to the Democratic Republic of the Congo

Associate Director of the Democracy Program, The Carter Center