Water Conflict and Cooperation: Looking Over the Horizon

Attempts to develop a positive, practical policy framework for environmental cooperation and sustainable peace are promising, but have not been widely analyzed or practiced. The Water Conflict and Cooperation Working Group, part of ECSP's Navigating Peace initiative, discusses these issues.

Water Conflict and Cooperation: Looking Over the Horizon

Political leaders often warn of impending "water wars" in our increasingly water-scarce world, but water's roles in conflict and cooperation are more complex than this rhetoric implies. Exhaustive research by Aaron Wolf of Oregon State University has firmly established that water resources rarely (if ever) cause international violent conflict. Historically, international political institutions managing water have adapted to increased scarcity without resorting to war to secure supplies.

This history does not, however, close the door on the international "water war" debate; as many as seven billion people—more than currently alive in the world today—may live under conditions of water scarcity and stress by 2050. However, water management could be utilized to proactively increase peace: in unstable regions, shared water resources may provide a path for building confidence among potential adversaries.

So far, attempts to develop a positive, practical policy framework for environmental cooperation and sustainable peace are promising, but have not been widely analyzed or practiced. On June 3-4, the Water Conflict and Cooperation Working Group, part of ECSP's Navigating Peace initiative, met at the Wilson Center to discuss these issues in order to:

Inger Andersen, a member of the World Bank's water team, kicked off the two-day meeting by outlining the unique characteristics that shape Africa's water resources. For example, Africa's colonial rulers imposed national boundaries according to their own interests and thus created over 60 international rivers. In addition, many nations in Africa suffer extreme climactic and hydrological variability that, coupled with endemic poverty and lack of infrastructure, can produce massive economic shocks and human insecurity. "Rivers of cooperation"—like the Nile, Senegal, and the Niger—are developing structures that address the realities of this colonial and climactic legacy, and that recognize the following benefits of cooperative management: 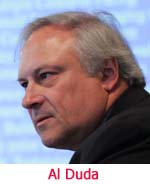 Al Duda of the Global Environmental Facility (GEF) followed with a presentation on "Measuring Success in River Basin Presentation Funding and Management," drawing on GEF's experience financing international projects that agree to incorporate global environmental benefits into their design. GEF tries to build capacity by providing "catalytic" funding—small amounts of money to support collaboration and encourage cooperation. Over 12 years, GEF has funded 95 projects in 132 countries, leveraging a $720 million investment into projects worth $2.5 billion by coordinating with other donors. GEF measures a project's success by gathering answers to three questions:

Gidon Bromberg of Friends of the Earth Middle East (FOEME) described his work on cross-boundary water issues in Israel, Palestine, and Jordan. Compared with political efforts to establish peace in the disputed region, FOEME's water working group has been a success: it is the only group that has continued to meet during the last four years of the intifada. Contrary to popular wisdom, water is not always an impediment to peace in the Middle East, but instead encourages the divided communities to work together. Despite its success as a confidence-building tool, however, water cooperation has not successfully protected water resources from degradation, as demonstrated by the sewage polluting the mountain aquifer that provides drinking water for three million people in the region. Bromberg listed FOEME's recommendations to improve sewage treatment and save the aquifer, including:

Alexander Carius of Adelphi Research outlined some guidelines for communicating environmental peacemaking lessons, using three examples: the Environment and Security Initiative sponsored by UNDP, OSCE, and UNEP; briefings on conflict and natural resources (forests, minerals, and water) commissioned by USAID; and an information platform on crisis prevention and the environment that Adelphi Research established for the German government. Carius emphasized the importance of:

The last speaker, Anthony Turton of the University of Pretoria, discussed the Southern African Development Community (SADC) and its plans to harmonize water policies among its fourteen member states. SADC, which began in the 1980s as an anti-apartheid grouping, reassessed its mission following the fall of apartheid in South Africa. As one of the drivers for a restructured SADC, water has been one of the most successful issues supporting regional integration. However, SADC faces high barriers to coordinating regional water policy. For example, monitoring river basins is very expensive, and most monitoring equipment is based on European models that are not designed for African conditions (sediment, elephants, theft, etc.). More importantly, capacity building has been a "dismal failure," because SADC does not have the human capacity to integrate regional expertise. Turton recommends that instead of adding money, SADC should identify experts and rotate them among institutions to share knowledge and capacity.

The two-day meeting concluded with a brainstorming session to develop topics for Water Working Group II's output paper. The group will meet again in January 2005 to finalize the paper, which will be completed in June 2005. 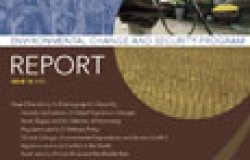