What "Lost" Cultures Can Contribute to Management of Our Planet

A discussion on what "Lost" cultures can contribute to management of our planet.

"Climate change is not a technical problem for indigenous people – it's a psychological and spiritual problem," said Wade Davis, explorer-in-residence at National Geographic, at the third in a series co-sponsored events by George Mason University and the Environmental Change and Security Program. Indigenous people are "being driven out of existence," as climate change alters landscapes and weather patterns that they have carefully adapted to over centuries, he said. These people are not "failed attempts at being modern…they are unique answers to the fundamental question, ‘what does it mean to be human and alive?'" he said. "It behooves us to pay attention to how they choose to live upon the earth."

"Losing Culture When You're Staying in One Place" 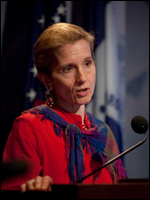 Susan Crate, associate professor of anthropology at George Mason University, joined Davis to discuss the effects of climate change on the Sakha people, an indigenous group in Siberia. "[The] Sakha and many other placed-based peoples in the world have an understanding of their world that all of nature is sentient," she said. But climate change threatens these people with a kind of identity loss, she said: "This is about losing culture when you're staying in one place…because the environment is literally changing underneath their feet."

The Sakha have lived as horse breeders and hay farmers for generations in the extreme Siberian environment, where annual temperatures range from 60 degrees below Celsius in the winter to 40 degrees Celsius in the summer. The Sakha have developed "very nuanced adaptations that are being disrupted by these weather and climate patterns changing," said Crate.

In a survey Crate conducted of Sakha households, many people noted warmer winters, colder summers, sudden temperature changes, changing seasonal patterns, more rain and snowfall, increased flooding, and fewer birds and animals. Horses, which stay outdoors all year round, have begun to starve, because frequent thaws and freezes cause ice sheets to form over their fodder. Increased precipitation has caused flooding, destroying roads, fields, and harvests.

Melting permafrost has also dramatically restructured the land, often causing ice wedges to push land up into steep hills, or causing homes to buckle as the land beneath them literally melts. "This is what people are seeing in their backyards," said Crate. "They are seeing these sudden valleys being formed where there used to be a flat expanse." 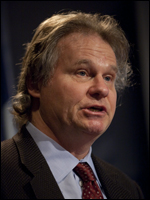 "The way we view the world is very culturally specific," Davis said, and ideology and beliefs can change the particular ecological footprint of that culture. For many indigenous peoples of the Amazon, "mythologies literally translate into a very precise land management plan that teaches one exactly how to live in the forest in great numbers."

In one indigenous community in the southern Andes, "people literally believe the world is animate, alive," but climate change has thrust them into a "total ritual panic." In one ritual that expresses this deep connection between community and environment, young Peruvian men climb into the Andes, chip blocks of ice from the glaciers, and carry them down to their community below. "Watching the recession of the [nearby] glaciers has so frightened the people that they have unilaterally decided to stop that aspect of the ritual," said Davis. Although the trivial amount of ice involved in the ritual has little impact, this decision is "another poignant case of indigenous people who have no complicity whatsoever in this dilemma personally taking responsibility for a solution in a manner that we have yet to do."

"This is not a notion derived from hippie ethnography," Davis said. "They live in the mountains, they see the way the mountains move with earthquakes, landslides; they see how a frost or a hailstorm in 10 minutes can wipe out the agricultural labor of a year, and they bring this connection into ritual."

In Western culture, by contrast, the environment can be bought, sold, and destroyed without any regard to the intrinsic value of the land itself or the cost to the commons of its destruction, said Davis. "It is a culturally bound way we rationalize the industrialization of an inanimate world, but that's highly anomalous in the affairs of human beings around the world."

"Cultural Myopia": The Curse of Humanity

The Aborigines are a powerful counterexample to Western modernity, says Davis. In the 670 Aboriginal languages and dialects, there is not a single word for time, past, present, or future, but only the "dream time," he said. While "progress was the ethos of 19th and 18th century Britain, the entire ethos of [Aboriginal] civilization was stasis," Davis said. "Had the human spirit followed this devotional track, yes, we would not have put a man on the moon, but on the other hand, we wouldn't be here talking about climate change."

[We must] challenge the notion we have of the exceptional nature of modernity and the exceptional nature of our particular culture…because the curse of humanity since the dawn of consciousness has been cultural myopia, whether it's the Huaorani thinking that every outsider is a cannibal, or whether it's us believing our way is the only way…We are many wonderful things, but the paragon of humanity's potential, we are not. These other peoples aren't failed attempts at being us; they are unique answers to that fundamental question. Together we can move forward to a truly multi-cultural, pluralistic world.

It's not about "freezing people in time," said Davis. "It's about the rights of free people to choose the components of their lives even as we ask the profound question, ‘what kind of world do we want to live in?'"