The Wilson Center, the Atlantic Council and the University of Pennsylvania’s Think Tanks and Civil Societies Program are pleased to present a panel discussion on the current era of political and digital disruption and the role of think tanks and policy-developers during this uncertain juncture. This event will also serve as the Washington, DC launch of the University of Pennsylvania’s 2017 Global Go To Think Tank Index.

The world is witnessing a rise in populism, nationalism, and protectionism that signals a challenge to the post-WWII order. At the same time, growing transnational challenges such as climate change, mass migration, and refugee crises, as well as traditional and non-traditional security threats, demand that countries and institutions cooperate more regularly and effectively.

Think tanks play a critical role in analyzing, developing, and promoting policy solutions, particularly in times of extreme disruption and change. However, these organizations now operate in information-flooded societies where facts, evidence, and credible research are often ignored — and where “alternative facts” and “fake news” can gain a footing. To remain relevant and impactful, think tanks and policy institutes must simultaneously pursue rigor, innovation, accessibility, and accountability more than ever before.

The Wilson Center, the Atlantic Council, and the University of Pennsylvania’s Think Tanks and Civil Societies Program presented a panel discussion on the current era of political and digital disruption and the role of think tanks and policy-developers during this uncertain juncture. The event also served as the Washington launch of the University of Pennsylvania’s 2017 Global Go To Think Tank Index.

“We need think tanks. More than ever, think tanks and the work we do matter. The information we produce matters. The safe political space we provide matters, and it matters to everyone: left, right, and center.”

“I think we learned one thing on November 8th, 2016, which is that sometimes what happens in Washington actually isn’t very important. Sometimes what’s happening outside Washington drives what may be happening inside Washington, and one of the roles of think tanks is to try to figure out and understand what that is.”

“The mobilization of our population writ large means that they are going to look for stuff, and you need to provide it in the way that they want to consume it. You’re going to get to a 70-year-old in a different way than you would to a millennial, and it’s not that the information you’re providing is different. It’s how you provide it, and how you package it. Some will like video and the other will want to have a roundtable discussion for an hour that they can watch online.”

“How do we take our complex public policy issues and make them available in a digital platform? As well as, how do we take the research, the analysis, and the data that we produce and help it to inform the public policy debate? So we have our work cut out for us—we have to do both.”

“The effort is really to create a global community of think tanks. And while politics and public policy may separate us, there are a whole host of challenges that unite us. And [after] this morning’s discussion, I am pleased to say that the state of think tanks is excellent.”

“We’ve had research teams go to 28 different states . . . [state and local officials] are actually most interested in learning, and in training, and things that they can use, and I think that reflects more broadly in the United States right now, that there’s a thirst for knowledge.”

“I actually think that the assault on facts is creating a counter-reaction, where more and more people are looking for institutions they can trust to provide them with a real sense of what’s going on in the massive amounts of disruption people are seeing every day.”

“You build, in some ways, from the bottom, where you not only have in some cases your research but your methodology and even, perhaps the data so that somebody else can look and validate it. Only a small part of our audience is ever going to do that, but the fact is that—especially for reporters and others . . . that story is part of the way that that short insight has credibility in the larger community. . . That audience at the base is part of how you establish people’s confidence so that you can get traffic for the short [material].”

“Our mission is to promote U.S. international leadership and partnership with our allies, it is not often to translate what policy is going to be, but it ended up being very useful because we could hear things from our friends and pass them along to our friends in the administration.”

“When the Trump administration came into power—actually after the election—there was a panic, let’s say, in the think tank community. Born out of the election, born out of the primary, many think tanks stood neutral, some didn’t. Some scholars did, some didn’t. So I decided to collect the conventional wisdom at the time, as is my want, and I wrote a column and it was called “this is the death of think tanks as we know them” . . . you know, a year into it, the reports of the death of the think tank community have been largely exaggerated—by me.” 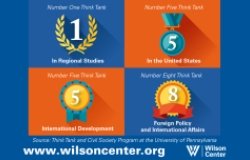