Skip to main content
Support
Explore More
Close
Article
Energy
The Human Cost of Climate Policy: A Call to the United States and Canada to Move in Lockstep on Labour Strategy
By Rona Ambrose on September 24, 2021
Share on FacebookShare on TwitterShare via Email
Share
Watch Now
Event

In September 1911, presidential contender Woodrow Wilson paid a visit to the Manhattan apartment of a gentleman whose political skills had been recommended to him. The gentleman, Colonel Edward M. House (the "colonel" was a Texas honorific), soon became a key member of Wilson's presidential campaign. After Wilson's election in 1912, House became Wilson's close friend and most trusted advisor. In fact, Godfrey Hodgson stated at a Division of U.S. Studies' discussion of Woodrow Wilson's Right Hand, House became Wilson's de facto "assistant president for foreign policy." House is "my second personality," Wilson declared; "his thoughts and mine are one."

Back in Texas, House had been a political kingmaker responsible for the election of three governors. Wilson gave House the opportunity to take his ambitions to the national stage, and House began the process in the election of 1912 by helping deliver Texas for Wilson. The president-elect responded by giving House control of patronage in the new administration – an extraordinary power for a private citizen

House's most crucial role, however, was in the area of foreign policy. House traveled to Europe frequently and, in the early years of the Wilson administration, was more attuned to the signs of impending war than most Americans. With Wilson's knowledge, he tried to negotiate between German and British officials in an unsuccessful attempt to prevent war. After this country's entry into World War I in 1917, House established a working group of scholars, described by Hodgson as made up of "Brahmins and refugees," to draw up a plan for the world once peace was achieved. In January 1918, Wilson decided to give a speech on the subject, and he and House sat down in the White House one night at half past ten to rough it out. They drew in part on a draft submitted by Walter Lippmann, a member of the working group. House later wrote in his diary that he and Wilson "finished remaking the map of the world...at half past twelve o'clock." The result was the Fourteen Points. It was also, Hodgson said, the beginning of the process by which diplomacy was taken out of the hands of the State Department.

House returned to Europe as Wilson's trusted emissary, and was successful in persuading the European powers to agree to an armistice in November, 1918. He quickly became "second only to President Wilson as the most influential delegate at the peace conference in Paris," according to Hodgson. When Wilson came back to the United States for the end of the lame duck congressional session in February 1919, he left House behind to hammer out an agreement on the basis of the Fourteen Points. Returning to Europe in March, Wilson accused House of compromising Wilson's dream by conceding too much to the allies' demands. This strained the friendship, but it soon broke, Hodgson declared, in part because Wilson's judgment was affected by a series of strokes and in part because of Wilson's second wife's dislike of House. The loss in 1919 of an opportunity for a lasting peace was therefore due to some extent to Wilson's insistence on imposing his moral vision on the world, his ignoring of House's skills as a realist and negotiator, and House's failure to remember that the only power he had was dependent upon Wilson's continuing faith in him.

Robert Beisner explored the institutional implications of the House-Wilson relationship. Seeking competence, loyalty and discretion, Wilson in effect emasculated the State Department. Franklin D. Roosevelt followed this pattern by relying on Harry Hopkins during World War II. Dean Acheson was able to redress the balance somewhat after the war. As Undersecretary of State during the Truman administration, at a time when the Secretary was frequently out of the country (1945-1947), Acheson became extremely close to Truman and began to alleviate Truman's suspicion of the State Department. The process continued when Acheson was named Secretary himself in 1949 and successfully battled competing institutions and advisors, becoming Truman's chief foreign policy advisor.

David Patterson addressed the question of why Hodgson's is the first full-length biography of House, in spite of the voluminous papers available about House's key role during a transformative time in U.S. history. The causes, he suggested, have been Americans' relative disinterest in World War I, the fact that House was not in himself a particularly interesting personality, and a general perception of Wilson as a towering figure who did not need to rely on others. Without questioning House's role as arguably the most influential advisor in U.S. history, Patterson thought Hodgson gave insufficient attention to the impact of Wilson's interactions with many others, such as socialist groups, women activists and liberals. He also wondered whether House's and Wilson's personality differences – Wilson's moral rigidity, as opposed to House's pragmatism – and their increasingly divergent perspectives on world affairs might not have been important factors in the split between the two men. Nevertheless, as all three speakers agreed, House was an important factor in American foreign policy at a moment when the world – in a manner not dissimilar from the early 21st century – was encountering globalization, revolution, and the threatening forces of angry nationalism. 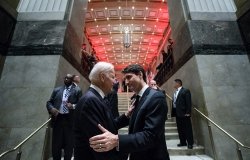