Young Men and War: Could We Have Predicted the Distribution of Violent Conflicts at the End of the Millennium?

In an attempt to answer this question, two psychologists from York University suggest that the size of a country's young male population can tell us if that country will engage in war or suffer from civil unrest. Their theory, which they call "the male age composition hypothesis," challenges the environmental security field's traditional model, which views conflict as the result of a variety of interrelated factors—particularly population growth, resource scarcity, and environmental degradation. 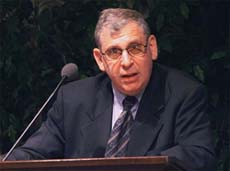 According to Neil Wiener, the new hypothesis shares the environmental security model's concern with population growth. But rather than focusing on growth of a society's whole population, the male age composition hypothesis looks at the size of the young male population in comparison to the whole population. The theory does not consider environmental degradation as a factor and looks at resource scarcity and competition only in terms of a "biological/evolutionary view." Wiener and his colleague, Christian Mesquida, used the "non-moral" framework of evolutionary psychology to explain the occurrence (and non-occurrence) of "coalitional aggression," a term they use to refer to war and other forms of collective aggression.

Where Have All the Young Men Gone?
Gone to Soldiers Every One
Building on the neglected 1960s work of scholars Herbert Moller and Gaston Bouthol, Mesquida and Wiener investigated a myriad of societies and conflicts—historical and contemporary, Southern and Northern, rich as well as poor. They studied population size, with particular attention to young men ages 15 to 29, and the severity of conflict, breaking the data down both by country and by continent. Their research showed that countries with more stable young male populations tended toward political stability, while countries with large young male populations tended toward political instability—a thesis that Mesquida and Wiener suggested explains such diverse situations as the 1968 Paris riots, 1972 Sri Lankan insurgency, and World War I Germany.

Mesquida pointed to the former Soviet republics between 1989 and 1993, which all underwent similar political transformations and yet experienced different levels of conflict severity. Mesquida posited that these differences resulted from differences in young male population sizes among the republics. 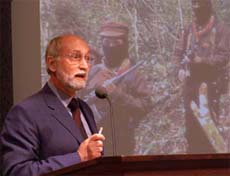 The researchers also looked at violence in Northern Ireland between 1969 and 1999 and showed that the bulk of the victims—those killed by bombs—were young men between the ages of 18 and 30. Mesquida suggested that as the Irish male population ages, the violence in that troubled area will ease.

A "Natural Phenomenon"
Pointing to war's long history, Wiener called war a "natural phenomenon, in accord with human nature and part of human nature." He explained that human (especially young male) tendencies to engage in coalitional aggression must be an advantageous trait; if it were not, natural selection would have ensured the trait's extinction by now. Instead, Wiener suggested that coalitional aggression appears to have evolved over the years, with human physiology and chemistry adapting to maximize capabilities for war. In particular, "sexual selection" accounts for coalitional aggression: young men use the resources available to them to attract a mate and reproduce. Males with a high social status (as judged by their culture) are preferred as mates, and in many cultures men can raise their status through war. In poor countries, aggression may be the only resource young men possess to gain a spouse. "Advantaged females" mate with "advantaged males," and consequently the genetic, cognitive, and emotional make-up that supports coalitional aggression is passed on to the next generation. Although war is dangerous, "failure to take risky behavior leads to a worse consequence—failure to reproduce," Wiener explained.

Mesquida displayed a number of pictures of insurgents—Zapatistas, Khmer Rouge, Somalis, and others—and pointed to a commonality: all of the rebels were young men. Pausing at one photograph, he said, "We see Somalis when, in fact, we should see young men." While these warriors might be acting on the will of the whole population, Mesquida suggested that they most likely were only following their own inclinations.

Mesquida and Wiener also attempted to debunk alternative theories of war and peace that link conflict to poverty or a lack of democracy. Although many scholars believe poverty often leads to conflict, the two psychologists insisted that, while a relationship exists today between per capita GDP and conflict, this was not always true. In earlier times, some of the world's wealthiest countries engaged in coalitional aggression. In contradicting the democratic peace theory—the idea that democracies do not go to war with each other—the researchers measured levels of democracy in a number of European countries in 1850 and 1900 using percentages of enfranchised population. Their findings indicate no relationship exists between levels of democratization and propensity to fight. Even "charismatic leaders," such as Saddam Hussein or Napoleon, are actually chosen by their young male populations, Wiener argued.

Wiener and Mesquida concluded that governments should pursue population and immigration policies designed to reduce the young male population in unstable countries as well as aiming economic policies and pacification efforts at that demographic group. Wiener suggested marrying young men off by giving them the resources to form families via such means as a "family" wage and shaping immigration quotas in more stable countries to accept more immigrants from countries with larger young male populations. Mesquida recommended family planning and "giving work to women, not men, so they don't make as many warriors."