Youth and Civil Society: The Missing Powers in Yemen

Mohammad Al-Shami discussed the different stakeholders and positions in Yemen and review what is happening on the ground. He drew attention to the struggles and consequences that Yemenis face if the conflict continues without an immediate solution. In addition, Al-Shami highlighted the importance of empowering youth movements and civil society in Yemen in order to mobilize the community to promote peace.

Mohammad Al-Shami, a youth activist and advocacy trainer in Yemen, discussed the different stakeholders and positions in Yemen, reviewed what is happening on the ground in the conflict, and highlighted the importance of youth empowerment and civil society in promoting peace.

Al-Shami started by explaining that what is happening in Yemen is not the result of one incident, but rather a series of actions dating back to the North Yemen Civil War of the 1960s. He noted the importance of identifying different stakeholders and parties that feed the conflict. Al-Shami also highlighted many different factors impacting the issues Yemen faces today. For example, the country’s main sources of funding are external, and Al-Shami noted how the accompanying external influence is apparent and problematic. Moreover, Yemen’s rigid centralization and weak government has fostered mistrust between communities and the government. Al-Shami also mentioned the crises the country is suffering including those related to water, education, health, and reduced humanitarian aid from the international community.

With regard to the issues that Yemen is currently facing, Al-Shami asserted that one of the major problems is that neither side is winning outright, so each group tries to claim partial victories by mobilizing communities and recruiting youth from small areas to fight. He also explained the inability of Yemen’s government to rule—an issue it faced even when the country was stable—in addition to its failure to absorb money and properly distribute it to the people. Al-Shami said that Yemeni youth believe they have no other options but to either stay home or join one of these groups because of their financial opportunities. He offered increasing youth involvement in civil society as a solution.

Al-Shami started the discussion on civil society by indicating that civil society organizations are doing all the work on the ground in Yemen, from distributing water and food to isolated villages to setting up remote clinics, all with limited funding mainly from the private sector. He continued to detail the relationship that these organizations have with the people, commenting on the trust they have been able to establish. Additionally, Al-Shami noted that these groups have the most access to each village throughout the country, are the strongest resource for information, and hold a unique role of making social change on the ground by improving education and empowering youth and women.

In the question and answer portion of the event, Esfandiari asked Al-Shami whether civil society organizations from both sides were working together. He stated that there is great conflict in major cities and the many rural villages that are isolated and thus deprived of basic necessities. He added that the opposing groups are more comfortable with conflict than peace, and although they both have organizations working on the ground, they do not work to empower one another. When asked how youth could be independent from the influence of big players, Al-Shami replied by articulating that civil society organizations need to take advantage of youth and their idealism, while also encouraging a shift from dependence to independence. Responding to a question about whether Yemen’s youth caused the conflict, he said that youth have been the fuel of the conflict because 70 percent of the population is under 30 and mostly uneducated. He noted that even if they do not agree with the ideology, the youth feel they have no other choice but to enlist in order to survive. 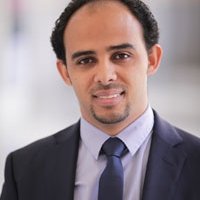