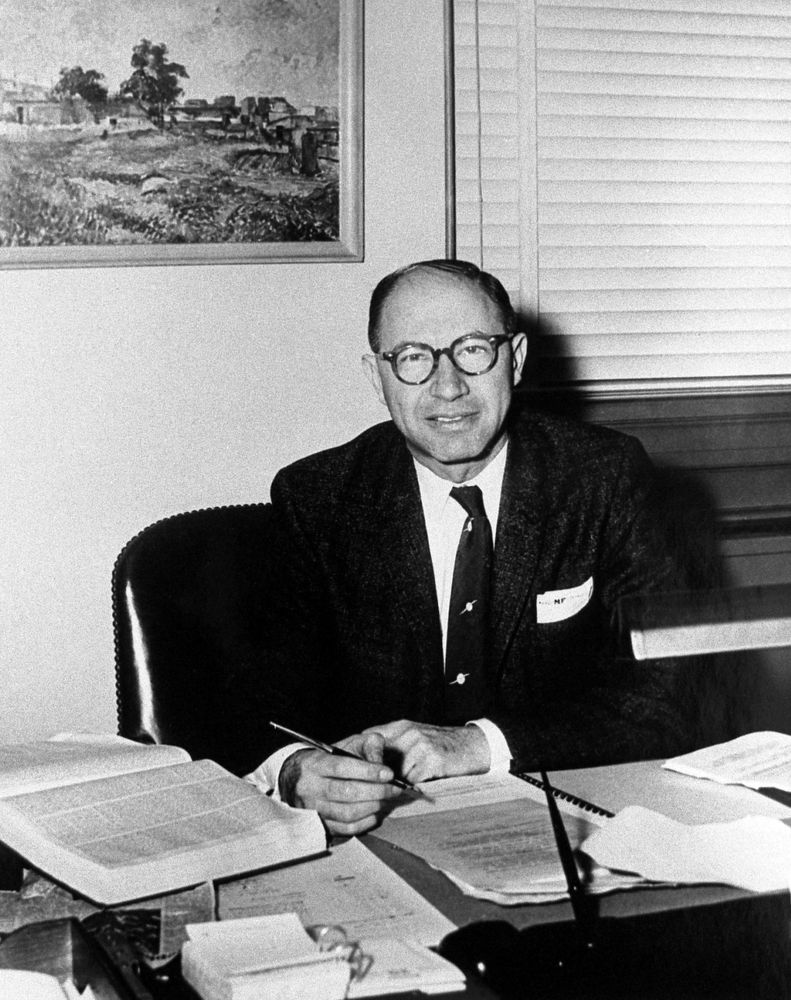 Myer “Mike” Feldman (June 22, 1914-March 1, 2007) was a trusted aid and confidant of President John F. Kennedy, who played an important but low-profile role in the Kennedy and Johnson administrations.

Trained as a lawyer at the University of Pennsylvania, Feldman worked as a law professor, served in the Army Air Forces during the Second World War, was a member of the Security and Exchange Commission and a staffer on the Senate Banking and Currency Committee before he became a legislative assistant to then Senator John F. Kennedy.  After working on Kennedy’s 1960 presidential campaign, the administration appointed Feldman to the position of deputy special council.  In this position Feldman played a largely unseen role as a special liaison to the Jewish community and Israel, in addition to being a key presidential adviser on domestic policy.

As part of his unofficial role as a presidential liaison on Israel, Feldman undertook a number of secret missions to Israel to meet with Prime Minister David Ben Gurion and Foreign Minister Golda Meir about the Palestinian refugee’s issues, arms sales and, most sensitive of all, Israel’s nuclear program.  After President Kennedy’s assassination in November 1963, Feldman joined the Johnson administration as general council until 1965, when he left government to establish his own law firm.

This interview with Mike (Myer) Feldman took place at his spacious law office in Washington, D.C. on 10 January 1994. At the time Feldman was eighty years of age. His youthfulness, in addition to his business and political savvy, belied his years. Indeed, he appeared a true macher (a Yiddish word for an “influential person,” or plainly a “big-shot”).[1]

In both interviews Feldman repeated the same anecdote regarding how President Kennedy appointed him “Deputy Counsel” (after Ted Sorenson had asked first for the title “Special Counsel”) and how he [Feldman] became the President’s point man on Israel (in addition to  presidential liaison with the Jewish community). When Feldman suggested to Kennedy that he might not be the right person due to his bias in favor of Israel, JFK responded that that’s exactly why he wanted him for the position. In that role Feldman had access to all diplomatic cables and intelligence reports on the Middle East (very much to the resentment of the professionals at the NSC, especially Robert Komer). Significantly, Kennedy delegated the two most sensitive issues requiring face-to-face meetings with Israeli leaders to Feldman —refugees and Dimona.

Some of my questions in this interview were follow-up questions from when I first interviewed Feldman in 1992. I handed him the transcript of that conversation and probed him on some of the issues he brought up. The most intriguing issue was his remark from 1992 that sometime early on, “maybe in the middle of 1965,” he had an estimate that Israel already possessed two nuclear bombs.[2]  As Feldman put it in 1992: “I remember the number two.  [Because] I said ‘what can you do with two bombs?’” I wanted to better understand what that meant.

Initially Feldman refused to disclose how he made that estimate or who provided him with inside information.  He said only that he had gotten that number sometime after he left office in 1965, perhaps in 1966 or even early 1967. While he did not disclose how or who told him that, he later acknowledged that the person to whom he posed the question “what can you do with two bombs” was Shimon Peres, by then out of government.  One might assume that Peres had also told him that Israel had two bombs in the first place.

When I probed further and asked whether he recalls how Peres responded to that question, his reply was “yeah, I do, but I don’t want to say.” Given Peres’ proposal on the eve of the 1967 War to conduct a nuclear test in order to deter an Arab attack, one may also presume that he had the same plan in mind during his discussion with Feldman in 1965 or 1966.[3] If true, this means that at least in those days Peres truly saw the bomb as an instrument that could be unveiled to deter war.

When I repeated the story that CIA Director Richard Helms told President Johnson sometime between 1967 and 1968 that Israel already had the bomb, and that Johnson had told Helms not to share this knowledge with Secretary of State Dean Rusk and Secretary of Defense Robert McNamara, Feldman noted three times that he had also heard the story and that it was true. When I asked him how he knew he paused, and then replied “Dick Helms told me that, he was a good friend of mine.”

Feldman’s view that nobody, JFK included, could have stopped Israel’s determination to develop a bomb represents another interesting point of our conversations. Feldman was convinced early on that one way or another, Israel would successfully develop a nuclear weapon and all that the U.S. could do was modify the way in which Israel went about it.

[1] I asked Feldman his age in order to write a biographical note and he told me that he was born in 1924.  I responded by noting that that he is around the age of Rabin and Peres, to which he smiled and nodded. To my surprise I found later in “Who is Who” that Myer Feldman was born in 1914.

[2] It wasn’t completely clear whether the estimate “two bombs” referred to two actual bombs or simply material for two bombs.

[3]  I discuss the details of Peres’ proposal in “Crossing the Threshold: The Untold Nuclear Dimension of the 1967 Arab-Israeli War and Its Contemporary Lessons,” Arms Control Today 37, no.5 (2007): 12-16. This article is based on the testimony of key individuals who were personally involved in the drama. Further detail is provided in my book The Worst-Kept Secret: Israel’s Bargain with the Bomb (New York: Columbia University Press, 2010), 289-290n58.