New Era of Relations Between Egypt and Saudi Arabia? 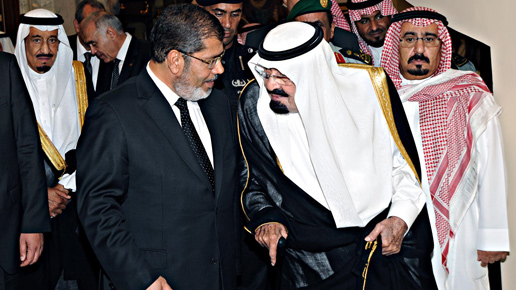 In his first trip abroad, new Egyptian President Mohamed Morsi traveled to Saudi Arabia on July 11 and 12. What does the visit mean? Why would Morsi select the kingdom for his first trip?

It’s hugely symbolic that he decided to go to Saudi Arabia for a number of reasons. First, since the departure of President Mubarak, the Saudis have already provided Egypt with close to $2 billion in financial and economic assistance. That’s the largest amount any foreign government has given the new Egyptian government.

Saudi Arabia and the Muslim Brotherhood have had tense relations in the past. The Saudi kingdom supported former Egyptian President Hosni Mubarak right up until the end, while the Muslim Brotherhood had supported Iraqi President Saddam Hussein against the Gulf sheikhdoms during the 1990-91 Gulf War. Are the new contacts likely to produce real rapprochement or is this a marriage of convenience?

We don’t know yet whether this budding new relationship will go anywhere. Both Morsi and the Saudis are very pragmatic when it comes to foreign policy, and both are going to be cautious in dealing with one another. But the Saudis want to convince the Muslim Brotherhood not to try to export this new brand of Egyptian democracy to Saudi Arabia. And the Egyptians need Saudi money to help them deal with the current economic crisis. So they both need each other for different reasons now.

In the past, the Saudis blamed the Muslim Brotherhood for politicizing the Saudi brand of Islam known as Wahhabism and turning Wahhabis into political activists. This led Osama bin Laden (a Saudi national) and al Qaeda to promote extremism, including a call to overthrow the House of Saud. So that background is a very important factor in the strains between the Saudi rulers and Egypt’s Muslim Brotherhood.

What are the key differences in political outlook between the Saudi royal family and Egypt’s Muslim Brotherhood?

One of the other differences is that the Muslim Brotherhood is much more willing to accept a pluralist society. In Saudi Arabia, there are no political parties, no labor unions, and very little civil society. In Egypt, it’s almost the exact opposite. You have lots of political parties, labor unions, civil society. The Muslim Brotherhood accepts the realities of Egypt-- realities that the Saudis reject for their own society.

What are the key similarities between the two countries?

On foreign policy, we still have to see how much they have in common. The Saudis currently have a very close military relationship with the United States. But we don’t know yet if the new Egyptian government will maintain close relations with Washington, but the Muslim Brotherhood is unlikely to antagonize the United States. It has too many political problems at home and too many financial and economic difficulties to resolve.  The new government will need the help of the United States and international financial organizations where Washington has great influence—like the IMF and the World Bank—to solve those problems.

Saudi Arabia and Egypt are the Arab world’s two powerhouses. Do they agree on regional issues, including Iran, the Arab-Israeli peace process, Syria and the Arab uprisings.

Iran is an all-consuming issue for Saudi Arabia; the two countries are the chief antagonists in the Persian Gulf. I expect the Egyptian government to tread very carefully on the issue of re-establishing relations with Iran in order not to antagonize Saudi Arabia and the other Gulf states, given the financial and economic aid that Egypt desperately needs. The Saudis are seeking Egyptian support for their conflict with Iran. The Egyptians could score a lot of points by emphasizing their commitments to the security of the Gulf States.

On the Israeli-Palestinian issue, the Saudis have been pushing for resolution for years. We’ll have to see whether the new Islamist government in Egypt is really going to do something, such as putting more pressure on Israel. That could bring the two countries very close together. The Saudis would be delighted—and would do what they can to get Israel and the Palestinians to resolve their conflict.

On Syria, the Saudis have been very active in providing financial and military help to the Syrian opposition; they have also declared that President Assad of Syria must go.

The Muslim Brotherhood is still not sure what its policy is. They may very well align with the Syrian opposition which has a strong Muslim Brotherhood component to it. This would create another common foreign policy link between Saudi Arabia and Egypt.

Egypt desperately needs economic assistance. Is oil-rich Saudi Arabia likely to help in a meaningful way? What will the Saudis want in return?

The Saudis have said they would provide $4 billion to Egypt, but they’ve only provided a little under $2 billion so far. They will watch and wait to see what the new Egyptian government does vis-à-vis Iran before it hands out the other $2 billion. The Saudis are certainly going to make it clear that the Egyptians should not have a close relationship with Iran.

Kuwait and Qatar have also offered billions of dollars in aid to Egypt, but so far have not delivered that much. They are also waiting to see what the new Egyptian government’s policy toward Iran and the Gulf Cooperation  Council which houses all six Arab gulf monarchies.