2017 Recipient of the Woodrow Wilson Award for Global Corporate Citizenship 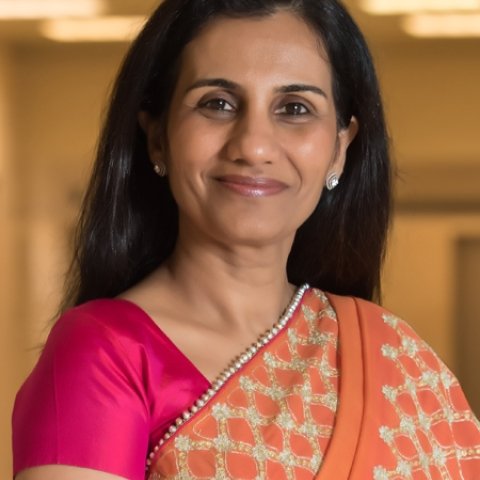 Chanda Kochhar is the Managing Director and Chief Executive Officer of ICICI Bank Limited.  She is widely recognised for her role in shaping the retail banking sector in India and for her leadership of the ICICI Group, as well as her contributions to various forums in India and globally.

Ms. Kochhar began her career, with the erstwhile ICICI Limited in 1984 and was elevated to the Board of Directors of ICICI Bank in 2001. She was instrumental in establishing ICICI Bank during the 1990s. She subsequently went on to head the infrastructure finance and corporate banking business at the Bank. In 2000, she took on the challenge of building the nascent retail business, focusing on technology, innovation, process reengineering and scaling up of distribution and taking the Bank to a leadership position in this business. During 2006-2007, she led the Bank’s corporate and international banking businesses during a period of heightened activity and global expansion by Indian companies. From 2007 to 2009, she was the Joint Managing Director & Chief Financial Officer of the Bank. This was a critical period which saw rapid change in the global financial landscape. She was elevated as the Managing Director & CEO of ICICI Bank in 2009 and since then has been responsible for the Bank’s diverse operations in India and overseas. She also chairs the boards of most of the Bank’s principal subsidiaries, which include India’s leading private sector life and general insurance companies.

In addition to her responsibilities at the ICICI Group, Ms. Kochhar is a member of the India – Japan Business Leaders Forum, the US-India CEO Forum and the Board of Trade. She is also the Deputy Chairman of the Indian Banks Association. She is on the boards of the National Institute of Securities Markets and Institute of International Finance. She was the President of the International Monetary Conference, an organization that annually brings together the chief executives of approximately 70 of the world’s largest financial institutions from 30 countries, along with officials from government institutions in 2015-16.

Ms. Kochhar has been a member of the Prime Minister’s Council on Trade & Industry, the Board of Trade and High-Level Committee on Financing Infrastructure. She was also the co-chair of the World Economic Forum’s Annual Meeting in 2011.

Ms. Kochhar received an honorary Doctor of Laws from Carleton University, Canada in 2014. The university conferred this award on Ms. Kochhar in recognition of her pioneering work in the financial sector, effective leadership in times of economic crisis and support for engaged business practices.

She was conferred with the Padma Bhushan, one of India's highest civilian honours, in 2011.

Ms. Kochhar has been recognised time and again in many of the prestigious power lists. She has been featured in ‘The World’s 100 Most Powerful Women’ list by Forbes International for seven consecutive years and the ‘Most Powerful Women in Business’ list by Fortune India for five consecutive years. She was also named among TIME magazine’s ‘100 Most Influential People in the world’ in 2015.