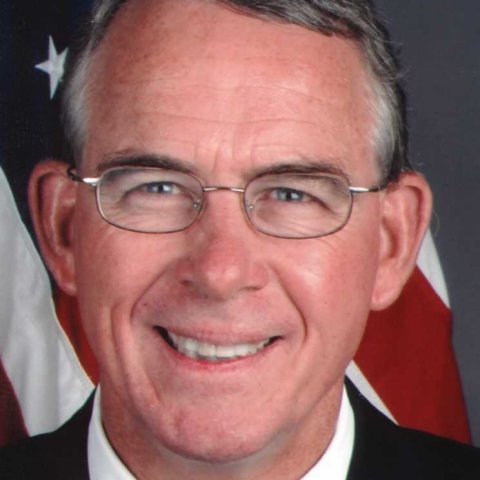 Ambassador Francis Rooney represented Florida’s 19th Congressional District in the United States House of Representatives from 2017 to 2021.  From 2005 to 2008 he served as the United States Ambassador to the Holy See, appointed by President George W. Bush and subsequently wrote a book about diplomacy and the US-Holy See relationship titled The Global Vatican.

He is a successful businessman who brought decades of private sector experience to government. From 1984 to 2005 he served as CEO of Rooney Holdings, Inc., a diversified group of companies engaged in construction, energy, real estate development, finance and electronics manufacturing.

One of the company’s subsidiaries is Manhattan Construction Company, which was founded in 1896 and is in the fifth generation of Rooney family management and ownership. Significant projects the company has built  include the Presidential Libraries for both George H. W. Bush in College Station, Texas, and George W. Bush in Dallas, Texas; the Dallas Cowboys and Houston Texans football stadiums; the U. S. Capitol Visitor’s Center; the Walter Reed Army Institute for Research; and the International Terminal at Hartsfield-Jackson Airport in Atlanta, Georgia. The company is currently completing one of the few biohazard level four medical and research facilities for the U. S. Army Corps of Engineers at Fort Detrick, Maryland.

Ambassador Rooney has served on numerous public and private boards, including Naples Community Hospital, St. Francis Hospital (Tulsa), the Florida Gulf Coast University Foundation, the University of Oklahoma College of International Studies, the University of Tulsa, the Center for the Study of the Presidency and Congress, the Trust for the National Mall (DC), the Advisory Board of the Panama Canal Authority and the Young Presidents’ Organization (for which he served as the International President in 1997-1998). He has served as a director of several publically traded companies including Helmerich & Payne, Cimarex, Laredo Petroleum, Bank of Oklahoma, and Amarant (formerly Mercantil Commercebank).

His a currently a member of the National Council of the American Enterprise Institute, the Advisory Board of the Partnership for Responsible Growth, the Council on Foreign Relations, the Inter-American Dialogue and the Council of American Ambassadors and is a director of the Forum Club of Southwest Florida, on which he also served 2013-2016. He is also a member of the Latin American Program Board of the Wilson Center.

In the 115th Congress, Rooney served as Vice-Chair of the Foreign Affairs Committee and as a member of the Joint Economic Committee.  In the 116th Congress, Rooney served as the ranking member of the Western Hemisphere subcommittee of the Foreign Affairs Committee.  He was the Republican co-chair of the Climate Solutions Caucus and a member of the bi-partisan Everglades and Estuary caucuses, which focus on restoring Florida’s ecosystems. He was successful in accomplishing his primary  objectives in Congress: extending the 2006 moratorium on offshore drilling in the Eastern Gulf of Mexico and fully funding the projects contained in the Comprehensive Everglades Restoration Plan (CERP), to protect and restore the Lake Okeechobee watershed.  He was considered the most bipartisan Republican member in Congress and  pushed for action on climate change.  He was one of two Republicans to introduce carbon tax bills in the 116th Congress.  He was the only Republican to vote for the $15 minimum wage and to oppose both of the administration’s emergency declarations to take DOD appropriations to build the border wall. He was one of several to oppose the Kirshner single state proposal for Israel-Palestine. He was the 1st, and nearly only, Republican Congressman to call on Trump to concede the election.

He has published over 150 op ed articles including Time to Concede- The Peaceful Transfer of Power is an American Tradition , The Hill 15 Nov 2020; Climate is on the Ballot in Florida This November, Naples Daily News and other Gannett Florida papers 29 Sept 2020;  Reactionary Populism Will Tear Us Apart If We Don’t Address Inequality, Real Clear Policy, with Cong. Ro Kanna, 27 January 2020; Saving the Oceans- One Place Where Congress Can Agree, Grist Fix, with Sen. Sheldon Whitehouse, 7 June 2019; Are We Done With China Now?, The National Review, 5 May 2020; Here’s How We Should Make Putin Pay for What Russia Has Done, Newsweek, 3 May 2018; Time To Pay Attention to Latin America in an Era of Change, The Hill, 12 March 2018.

He and his wife Kathleen live in Naples Florida, and Washington, DC, and have three children: Larry, married to Porscha; Michael, married to Frances; and Kathleen, married to Rob; one grandson, Beckett; and one granddaughter, Bergen.

Ambassador Rooney is fluent in Spanish and regularly gives talks and interviews in Spanish, and conversational in Italian.