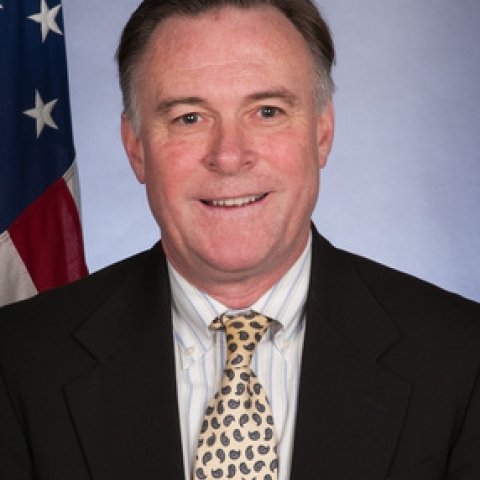 Director for the Office of Space and Advanced Technology, Department of State

Ken Hodgkins has been with the Department of State since 1987 and presently is the Director for the Office of Space and Advanced Technology in the Bureau of Oceans, Environment and Science. The office is responsible for bilateral and multilateral cooperation in civil and commercial space and high technology activities, including the International Space Station, collaboration in global navigation satellite systems, the International Thermonuclear Experimental Reactor (ITER), and nanotechnology, and represents the Department in national space policy review and development.  Mr. Hodgkins serves as the U.S. Representative to the UN Committee on the Peaceful Uses of Outer Space (COPUOS), and the Alternate Representative for the Committee’s Scientific and Technical and Legal Subcommittees since 1987. Mr. Hodgkins is the leading authoritative voice within the United States on the procedures and dynamics of the Committee and its sub-committees.

He has been the State representative for major Presidential policy reviews on remote sensing, the Global Positioning Satellite (GPS) system, space traffic management, space weather, orbital debris, and the use of space nuclear power sources in space.  Before coming to the State Department, he was the Director for International Affairs at the National Environmental Satellite Data and Information Service (NESDIS) of the Department of Commerce.

In 2010 and 2017, respectively, he was the first and only Department of State recipient of the American Institute of Aeronautics and Astronautics’ International Cooperation Award and the American Astronautical Society’s award for Advancement of International Cooperation.  He was also named by GPS World as a “GNSS Leader to Watch in 2009-2010.” Mr. Hodgkins is a member elect of the International Academy of Astronautics (IAA) and the International Institute of Space Law (IISL). Mr. Hodgkins was awarded by the University of Maine in May 2017 an Honorary Doctor of Humane Letters. In September of 2017, he was awarded by the IAA the Social Sciences Award for significant contributions to the advancement of astronautical sciences.

Mr. Hodgkins holds a BA in Political Science (1978) and an MPA (1980) from the University of Maine at Orono.  He joined the Federal government in 1980 as a Presidential Management Fellow and is a member of the US Senior Executive Service.