Skip to main content
Support
Explore More
Close
Blog post
Coronavirus
Elections During a Pandemic: South Korea Shows How to Safely Hold a National Election During The COVID-19 Crisis
By Do Kyung Ryuk on May 19, 2020
Share on FacebookShare on TwitterShare via Email
Share
Part of the Viewpoints Series
Publication

In 2013, Rise of the Right in Elections Across the Mideast 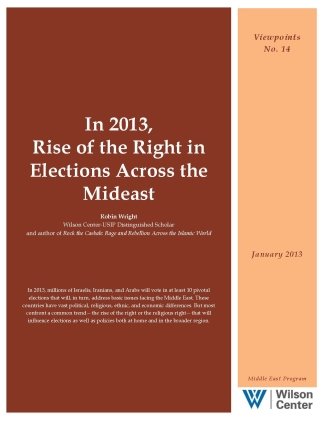 In 2013, millions of Israelis, Iranians, and Arabs will vote in at least 10 pivotal elections that will, in turn, address basic issues facing the Middle East. These countries have vast political, religious, ethnic, and economic differences. But most confront a common trend—the rise of the right or the religious right—that will influence elections as well as policies both at home and in the broader region.