American Exceptionalism in Syria: The Faith and the Heresy 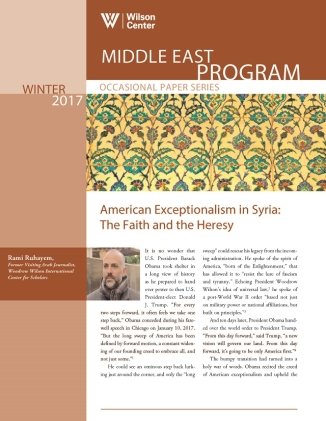 It is no wonder that U.S. President Barack Obama took shelter in a long view of history as he prepared to hand over power to then U.S. President-elect Donald J. Trump. “For every two steps forward, it often feels we take one step back,” Obama conceded during his farewell speech in Chicago on January 10, 2017. “But the long sweep of America has been defined by forward motion, a constant widening of our founding creed to embrace all, and not just some.”[i]

He could see an ominous step back lurking just around the corner, and only the “long sweep” could rescue his legacy from the incoming administration. He spoke of the spirit of America, “born of the Enlightenment,” that has allowed it to “resist the lure of fascism and tyranny.” Echoing President Woodrow Wilson’s idea of universal law,[ii] he spoke of a post-World War II order “based not just on military power or national affiliations, but built on principles.”[iii]

The bumpy transition had turned into a holy war of words. Obama recited the creed of American exceptionalism and upheld the image of America as an enlightened global leader destined to lead for the good of all humanity. Trump appealed to nationalism—pure and simple.

Amid their historic duel, the two men appeared to be in agreement on one thing, in substance if not in style.

“We have taken out tens of thousands of terrorists—including Bin Laden,” said Obama. “The global coalition we’re leading against ISIL has taken out their leaders and taken away about half their territory. ISIL will be destroyed, and no one who threatens America will ever be safe.”

With a measure of stylistic innovation and a minor policy tweak, Trump picked up where Obama left off: “We will reinforce old alliances and form new ones—and unite the civilized world against radical Islamic terrorism, which we will eradicate completely from the face of the earth.”

[ii] ”In Wilson’s first State of the Union Address, on December 2, 1913, he laid down the outline of what later came to be known as Wilsoniansim. Universal law and not equilibrium, national trustworthiness and not national self-assertion were, in Wilson’s view, the foundations of international order.” Kissinger, Henry. Diplomacy. Touchstone, 1995. p.44.

Publication
Border Security
Threats Perceived and Real: New Data and the Need for a New Approach to the Turkish-SDF Border Conflict
By Amy Austin Holmes