Beyond India: The Utility of Sino-Pakistani Relations in Chinese Foreign Policy, 1962-1965 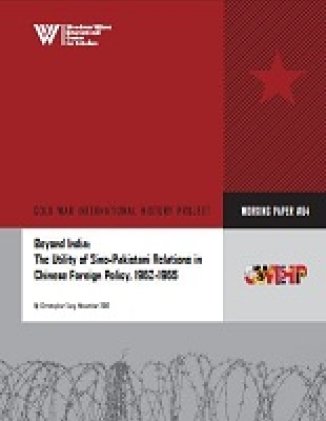 In CWIHP Working Paper 64, "Beyond India: The Utility of Sino-Pakistani Relations in Chinese Foreign Policy, 1962-1965," Christopher Tang argues that the Sino-Pakistani relationship must be viewed within the larger context of China’s foreign policy.

Tang suggests that cordial relations with Pakistan greatly aided Beijing’s daunting task of appearing as a country that was at once both revolutionary and peaceful.  In aiming to challenge the U.S. and the USSR and secure leadership of world revolution on the international stage while also reigniting class struggle at home, Mao Zedong was eager to embrace a revolutionary foreign policy by 1962.  At the same time, Beijing’s need to court international legitimacy and Third World friends across the Afro-Asian-Latin American world encouraged it to cultivate an image as a peaceful defender of developing world interests.  In seeking to carve out this at times contradictory international image, the Sino-Pakistani relationship proved particularly handy for Chinese Communist Party (CCP) leaders.  Through Pakistan’s embrace of revolutionary Afro-Asian discourse, its ongoing national liberation struggle in Kashmir, and its 1965 war with India, China’s support for Ayub Khan’s regime allowed it to claim a revolutionary foreign policy.  In China’s quest to self-identify as a defender of international peace, Pakistan proved helpful by also painting India’s Jawaharlal Nehru as a hostile betrayer of Third World unity, actively promoting China as a pursuer of international peace, and aiding PRC efforts to deter U.S. expansion of the Vietnam War.

Christopher Tang is a PhD candidate in the History Department at Cornell University. He earned his BA and MA from McGill University. His current research focuses on the intersection between foreign relations and domestic mobilization in the People’s Republic of China under Mao. In particular, he is interested in exploring the domestic motives behind China’s foreign policy in the early to mid-1960s, and the effect of China’s Cold War internationalism on campaigns of popular mobilization at home, in the lead up to the Cultural Revolution. He has previously published a book chapter on the Sino-Pakistani border in Beijing’s Power and China’s Borders: Twenty Neighbors in Asia (Armonk, NY: ME Sharpe, 2012) edited by Bruce Elleman, Stephen Kotkin, and Clive Schofield, and will be contributing a selection of Chinese documents on Sino-Pakistani relations in a forthcoming issue of the Cold War International History Project Bulletin.