The Mediterranean region which promised to become an integrated zone of energy security only a decade and half ago has continued to deteriorate into the leading area of energy insecurity in the world.  Five factors have contributed to this situation.

From a longer term strategic point of view, these problems reinforced the notion that the future of oil and gas supply and demand was moving to the Pacific Ocean away from the Atlantic Basin, which the Mediterranean Sea was part of in terms of oil/gas dynamics, and that investments, whether by governments, national oil companies or international private companies would focus on that region.

Several decades of underdevelopment and mismanagement of their economies led to revolution and state failure in a number of countries.  Libya and Syria were the poster children of this phenomenon.  There has been no resolution to their internal strife and their oil and gas sectors continue to suffer from political upheavals.  Syria was never that important to the region’s supply or demand side equation and its oil/gas production has virtually disappeared, but Libya was one of the major second tier producers for decades.  Despite the earlier embargo against the Gaddhafi regime, its sector continued to produce well over 1.5 million barrels per day (b/d).  Currently, with worsening lawlessness in the country, where over 50 militias roughly affiliated to two separate governments, one based in Tripoli and one in Tabruk, with their associated parliaments, compete for oil revenues to fund their existence and with elements tied to the Islamic State actually intent on destroying oil facilities not just controlling them, production has limped along at around 400,000 b/d or less.  The prospects for a resolution look extremely weak despite UN mediation.

Even in Egypt, where General Sisi’s government has been able to restore some order, the post revolution period has taken its toll on the oil and gas sector.  Payment arrears to foreign oil and gas companies for their production reached nearly $8 billion before some agreements were struck to reschedule payments.  This led to a sharp cutback in investment by the companies and delayed a number of projects.  Moreover, Egypt was late in revising domestic gas prices, leading to excessive consumption, especially after the previous governments had tried to push the country away from oil consumption to ensure adequate volumes to sustain oil exports.  This led to domestic consumption crowding out exports and forced the government to import LNG which contributed to its external balance of payments problems, already aggravated by capital flight and a fall in foreign direct investment in the wake of the political turbulence.  Sisi’s government has raised domestic prices, regularized payments to foreign companies and the recent large gas finds in the Mediterranean Sea promise to restore Egypt to export status by 2019.  Nonetheless, international companies continue to fear political problems due to the harsh crackdown in the country following the military coup and attacks against infrastructure particularly in the Sinai and along the Suez Canal.  In fact, one of the world’s most important logistical choke points has now more than ever, since it was closed in the sixties and the seventies, come under increased scrutiny for its potential danger to passage.

In the past, tensions between Russia and Europe were viewed as benefiting North Africa or that other member of the European gas supply triad, Norway.  Moreover, Turkey moved rapidly to capitalize on its geographical location to make itself the “cross roads” of energy supplies between Central Asia/Caucuses, Middle East (Iran and Iraq) and even Russia to Europe.  This is no more the case.  Algeria, which has 53.5 billion cubic meters (bcm) of pipeline capacity connecting itself to Spain and Italy, was only able to supply 30 bcm of gas to Europe because domestic demand (expected to rise 4 percent this year alone) is crowding out exports, and underinvestment due to budgetary constraints, especially after the fall in oil and gas prices and poor terms to foreign companies, have constrained supplies.  Algeria’s LNG exports grew in 2014 to 17.3 bcm from 14.9 bcm in 2013 but were not able to compensate for constrained pipeline exports.  Total gas production in Algeria is expected to grow to 93 bcm by 2020 up from 83 bcm in 2014 but domestic demand will also grow rapidly leaving exports as constrained as recent times and well below Sonatrach’s hope that they could grow to 65 bcm.

Turkey’s immediate goal is to satisfy its own growing energy demand. Turkey imports over 95% of its oil and gas needs. Turkey’s aim is to use its geostrategic transit role not only to pursue a successful energy security strategy to satisfy its growing domestic energy demand but also as leverage to reduce its import bill. For example, around 3 million b/d of crude oil and petroleum products are passing through the Turkish Straits via the Bosphorus and the Dardanelles waterway in 2013 connecting Russian and Caspian oil cargoes to Western markets. Moreover, Turkey is keen to become a gas transit route in order to satisfy European gas demand in the next five to ten years.

But Turkey’s energy transit role remains vulnerable given that it is under pressure to build the necessary transport and storage infrastructure for hydrocarbons. Turkey’s use for gas transit is particularly dependent on the economic growth and gas demand outlook for Europe over the next decade. Overall, Turkey’s desire is to become a transit route connecting producers in the Middle East and the Caucasus with consumers in Europe. But this strategy is facing headwinds as the current trend for hydrocarbon trade is going eastward toward the more prominent (relatively slowing) Asian markets. Lastly, increasing attacks on Turkey’s pipeline infrastructure in the east illustrate the ongoing political risks to future gas imports to Turkey and any plans for gas transits via Turkey to Europe.

European demand, particularly in Southern Europe, notably Italy, has been depressed since the debt crisis starting in 2008.  The IEA expects demand from the EU plus Norway, Switzerland and Turkey (its European member states) to rise to 500 bcm by 2020 which is an increase of 18 bcm from 2014; however, that is still 50 bcm below 2008 levels.  European supplies are slated to decline by 27 bcm to 227 bcm in 2020, most of it from the Netherlands and stagnant output from Norway due to investment cut backs and aging fields.

Nonetheless, from the point of view of North African or other new entrants from the Mediterranean this is cold comfort because of new competition from the Trans Adriatic Pipeline (capacity 10 bcm) being built from Azerbaijan and North American LNG supplies which are highly competitively priced.  Even traditional suppliers, Qatar and Russia, into Europe have been competitively pricing their LNG, prices of which have halved to $7 per million British thermal units (mmbtu) in 2015.  Low prices will also make it difficult for the Cypriot Aphrodite field to be profitable – recent calculations suggest that production costs for this field are $6 per mmbtu and with liquefaction and transport costs would come in at $10 per mmbtu.  Cyprus also held out the prospect of using the currently mothballed Egyptian LNG facilities, but may be blocked from doing that since Egypt is expected to become an exporter again of its own domestic supplies.

Lower oil and gas prices will have a long term impact on the region.  Already reeling from political turmoil which occurred in a period of very high historic prices, giving governments of the region potentially huge means to buy off their populations and failing at that, a period of low oil prices could only make things worse.  Budget problems across the region have reemerged and with the fear of cutting back too much on spending for political reasons, governments will run down foreign assets holdings and start incurring debt.

Countries like Egypt, Tunisia, and Algeria are attempting to entice foreign businesses in the oil and gas sector but also in other areas to invest in their countries.  However, the moment may have passed partly due to problems in investor countries’ own back yard and the perception of extremely high political risk in the Mediterranean countries.  International oil and gas companies, particularly the majors, who have the appetite for risk, have seen their profits sharply decline and also have taken large write offs on their investments in North Africa.  Smaller companies, the independents, which avoided foreign investments in the last decade due to more difficult terms in the period of high prices and instead invested heavily in the North American shale gas and tight oil play are now financially constrained themselves and have even less appetite for risk.  The national oil company phenomenon of the 2000s, especially the Asian NOCs seemed to have a limitless desire to invest in any area, no matter what the risks, now have been constrained by their own financial difficulties or stricter monitoring by their state owners.

In a global investment environment of low oil and gas prices, national oil companies, particularly, but private firms as well, are focused on the key supply centers and growing markets.  As a result, large producers of oil and gas like Saudi Arabia, Russia, Qatar and others are keen on growing or maintaining a strong hold on the major Asian consumers.  The focus is on China currently, but India and Southeast Asia will become increasingly more important.  Moreover, less politically risky, although possibly more economically challenging, North America continues to attract buyer interest to source supplies and investor interest to profit from cheaper assets and companies.  This geographic shift will turn attention away from the Mediterranean and diminish hopes of the region to be part of the wider global energy security equation.  Possibly with greater stability and given still abundant resources in the region, in a decade or so the Mediterranean could return to being an important energy region, but for the next several years it is difficult to see anything but more of the same.

Fareed Mohamedi is an international economist specializing in the political economy of oil and gas producing states.  He has worked previously at Statoil, PFC Energy, Moody’s Investor Service, the Institute of International Finance, and Wharton Econometrics. 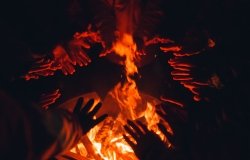 Blog post
Disaster Management
Stability against All Odds: Ukrainian Energy during the First Weeks of the War
By Andrian Prokip on March 28, 2022