Egypt: A Country Awaits a Revolution 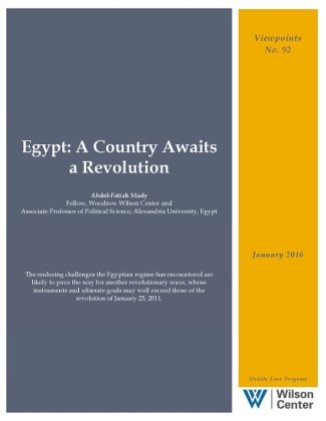 The Egyptian government’s crushing of the 2011 popular uprising, its downplaying of those events, and, more importantly, its willful disregard for the revolution’s significance will have dire consequences not only for Egypt, but also for the entire region.

The enduring challenges the current regime has encountered since then are, in fact, likely to pave the way for yet another revolutionary wave, whose instruments and ultimate goals may well exceed those of the revolution of January 25, 2011.

No rational political regime would ever assume that the type of events wracking Egypt could be addressed by taking security measures or enacting anti-terrorism legislation that breach the constitution—a document that was drafted by the same regime—and diverge from the norms widely acknowledged and accepted in the 21st century.

The seriousness of the situation in the Sinai has been underestimated. The northern portion of the peninsula has now slipped almost entirely from under the control of the authorities, and acts of violence against army soldiers there have escalated.

The principal reason for this must be seen in the context of the regime’s policies toward the people of the Sinai, who accuse the regime of systematic killing and displacing populations. This has escalated from accusations of social ostracism, which was the case over the last 40 years.

Moreover, both the media and official discourse have deliberately obscured the fact that violent groups in the Sinai have antagonized the Muslim Brotherhood, because these groups view the Brotherhood’s involvement in democracy as a violation of shari’a. Escalation of repression against the Brotherhood will only lead to an increased number of youths joining these violent groups, because they have lost hope in any peaceful participation in politics.

The government has downplayed—if not ignored altogether—the level of violence in Egypt as if thousands of activists and soldiers had not paid with their lives in the unrest. The number of political prisoners (well in excess of 40,000), many of whom are in ill-health and subjected to all forms of mistreatment, is hardly ever mentioned. In addition, the number of political prisoners who have died in detention centers has reached more than 260. There have also been multiple instances of illegal killings, torture, deprivation of medications, and denial of visitation rights. Tens of thousands are being pursued by the regime, both inside the country and abroad. Rather than curbing terrorism, such repressive policies are likely to foster even more of it. In fact, these government policies and widespread abuse of political prisoners are considered crimes against humanity by human rights organizations, and therefore do not have a statute of limitations.

The regime’s justifications for such abuse and violations are insubstantial, because accusations of terrorism, or espionage, for those who oppose the regime are implausible. Moreover, it is extremely perilous to inflate the scope of what really constitutes terrorism. According to the regime’s “anti-terrorism law,” incitement to commit a terrorist act shall be punished, even if such incitement does not have any impact, meaning it does not result in any actual act of terrorism. In addition, under that same law, “promoting ideas that call for violence,” and creating or using “websites that spread such ideas,” will carry a penalty between five and seven years in jail. This is a clear violation of both Egyptian law and the decrees of Egypt’s Supreme Constitutional Court.

The anti-terrorism law grants law enforcement officers the right to arrest, search, and keep any citizen in custody merely on suspicion of breaking the law. The law also prohibits publishing any news that defies the official narrative. It sets a minimum fine of 200,000 Egyptian pounds (about $25,000) and a maximum of 500,000 pounds for anyone who strays from government statements in publishing or spreading “false” reports on attacks or security operations against militants. Under that same law, punishments can include deportation, prohibition from approaching or frequenting public spaces, and suspension from work in certain places. Financing “terrorist groups” also carries a penalty of life in prison.

The question must be asked: are there any precedents under which terrorism has ever been combated via laws like Egypt’s anti-terrorism law, which suppresses those who express political dissent and goes so far as to deprive them of their most basic human rights?

The regime underestimated the effect of its policies not only on the opposition, but also on Egyptians who did not unquestionably support them. The government enacted legislation designed to virtually abolish politics and instill fear throughout the country. Since the 2013 coup, the interim and current presidents passed more than 500 laws. As critical as such laws might otherwise be, they should not be left in the hands of one person or one authority, because they pertain to important issues, including the legal framework of elections and political activism, rules of promotions and retirement for military officers, armaments, taxes, civil service, the penal code, police forces, Al-Azhar University investments, etc.

Ruled by many despots over the course of their illustrious history, Egyptians have regularly revolted against tyrants, ousting many of them in the process.

Similar to totalitarian and police state regimes, the intelligence and security agencies in Egypt managed and engineered the 2015 parliamentary elections. The elections took place under the state's watchful eye and within a climate of severe suppression of basic freedoms of expression, press, and assembly. The elections laws, anti-protest law, and anti-terrorism law have prevented real contenders from running for parliamentary seats, including the most serious opponent—the Muslim Brotherhood—as well as the youth and a number of new parties established after the 2011 uprising. The current parliament is dominated largely by businessmen, former members of Hosni Mubarak’s now-defunct National Democratic Party, and retired generals. Top matters on the parliament's agenda are approving the more than 500 laws that President Abdul-Fattah al-Sisi has issued and amending the constitution to give him more powers.

Furthermore, Egypt’s international status, in its resurgent role as the region’s policeman, is being downplayed and obscured in the official media narrative. Parenthetically, people in the region understand full well who, besides terrorists, are perceived by those in power as their main foe: those who demand elected and accountable national governments, the rule of law, transparency, and justice.

There have been a number of reports, both in the West and elsewhere, that advocate for shifting the focus of Egypt’s military doctrine to the “war on terror,” with all the attendant changes in armaments, military training, and strategy that such a shift would necessitate. There is, for example, a lack of clarity regarding armament transactions, types of weaponry, and the goal of joint military maneuvers with Russia, the United States, and France.

Israel, which heretofore had been Egypt’s primary opponent, would now become Cairo’s principal ally in the “war on terror.” At the same time, though, Israel is being economically boycotted by those in the West that object to the Israeli government’s systematic violation of human rights and its policy on settlements. According to Israeli press reports, some Israeli politicians have said this Western condemnation of their occupation policies is a paradox, because some Western nations support the Arab governments’ “war on terror” even though the latter continue to defy their people’s demands for freedom and justice.

These questions must be asked: shouldn't these developments move us to re-think the threats that Egypt’s national security (and that of other Arab countries) might be confronted with in the absence of individual liberties and elected institutions, in addition to the threats posed by Egypt’s regime-controlled media and their misleading statements about "the pre-eminence of the state"? Can Egypt and the entire region undergo and endure major transformations in their military doctrine under the current circumstances?

Egypt’s Arab and Islamic identity has been underestimated, because many Egyptians now believe this identity is gravely imperiled. While it is true that attacks on the fundamentals of this identity began decades ago, it is also apparent that the current war waged against so-called political Islam encompasses everything related to religion, including Islamic values, historical figures, educational curricula, charities, sermons, and prayers in mosques, among others. Furthermore, women wearing head scarves are now being banned from certain places. The necessity of combating extremism and terrorism is the largely unsubstantiated explanation given to justify such encroachments on Egypt’s dual Arab and Islamic identity.

Some among the elites and officials also use the argument of “the well-standing of the state of Egypt” or “safeguarding Egypt against a fate similar to that of Iraq and Syria” in an attempt to justify the attacks on Egypt’s identity. And the media have been rather successful in making that fallacious argument palatable to the masses. A number of other fallacies, alas, have also taken root: “Egypt is unique and will never change,” “Egyptians are not eligible for democracy,” and “despotism is Egypt’s only choice.” The spread of such fallacies can be highly demoralizing.

Egypt, however, will debunk these, too. Ruled by many despots over the course of their illustrious history, Egyptians have regularly revolted against tyrants, ousting many of them in the process. Besides, times have changed, and the availability of social media will ultimately be instrumental in reversing course again, as the overthrow of tyrants and the aspirations of the peoples of the world for freedom and justice have now become a universal trend.