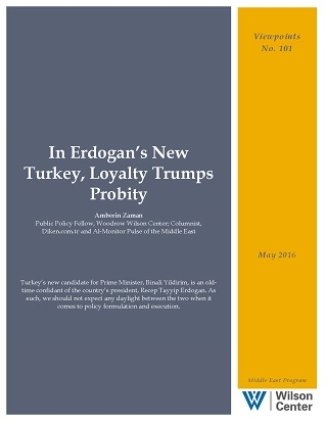 There were yawns all round when Turkey’s ruling Justice and Development Party (AKP) announced on May 19th that it was nominating Minister of Transport, Binali Yildirim, as its sole candidate for party leadership in a convention that is scheduled for May 22.

If all goes to plan, the lusterless Yildirim will be tasked with forming a new cabinet next week, which he will likely unveil in early June.

Rumors that the country’s president, Recep Tayyip Erdogan, had anointed Yildirim as the successor to Ahmet Davutoglu—who was forcibly ejected by Erdogan for seeking to carve out a power base of his own—had been floating around for some time.

Yildirim poses no threat to Erdogan’s authority. He possesses neither Davutoglu’s global stature nor his popularity within the AKP base. An engineer by training, Yildirim is a loud proponent of the executive presidential system that Erdogan has already de facto imposed but wants to formalize through constitutional changes.

The two men also happen to be old chums. Yildirim’s alliance with the president dates back to the 1990s when the latter was mayor of Istanbul and made Yildirim the head of the intra-city catamarans known as “the Sea Buses.” Maritime connections are a recurring theme in Erdogan’s world; his mercurial father Ahmet was a sea captain, and his sons Burak and Bilal own several ships.

Yildirim became Minister of Transport, a prize for patronage, in 2002 when the AKP first shot to power. He retained the post until 2013, surviving controversy over a fast train crash that killed 41 people in 2004. But his luck seemed to have dried up when Yildirim who was named along with four cabinet ministers who were forced out in the massive corruption scandal that shook the government in December that year. Allegations against Yildirim, his sons, and his brother-in-law included receiving bribes and contract fixing. But the cases were hastily buried; the prosecutors involved were reassigned, sacked, or prosecuted themselves. Yildirim staged a comeback in the November 2015 snap polls, reclaiming his portfolio as transport minister—making him the sole minister among the quintet named in the corruption case to do so.

He is expected to faithfully execute all of Erdogan’s policies. Thus the war against the outlawed Kurdistan Workers’ Party (PKK) will continue in all its ferocity despite the rapidly climbing death toll among Turkish security forces and growing international scrutiny of human rights violations in the mainly Kurdish southeast. The campaign to crush any remnants of the Fethullah Gulen network within the bureaucracy, media, and the business world will also continue. Gulen, an influential Muslim cleric who was Erdogan’s fast friend in the early days of AKP rule, is thought to be the driving force in the graft probe that targeted Erdogan and his family as well.

With Yildirim’s help Erdogan is also expected to press ahead with efforts to further marginalize the pro-Kurdish Peoples’ Democracy Party (HDP), all part of a campaign to drum up nationalist votes ahead of a possible referendum on constitutional changes that would pave the way for Erdogan’s executive presidency.

Hopes that a burgeoning internal rebellion, spearheaded by Davutoglu, might gain traction evaporated when the soon to be ex-prime minister was seen “paying court” at the wedding of Erdogan’s younger daughter, Summeye, on May 14. Another prominent guest was Abdullah Gul, the former president, whose name is frequently evoked as a potential challenger to Erdogan. But the final straw for Erdogan’s opponents was the presence of Hulusi Akar, the Chief of General Staff, who served as a witness at the young couple’s wedding hours after attending the funeral of a soldier slain by the PKK. Faced with a barrage of outrage on Twitter, the general’s entourage spread the word that he was there for the groom, Selcuk Bayraktar. The groom’s family business produces the Bayraktar drone, which is stocked by the Turkish military. Apparently the question of a possible conflict of interest did not figure in the army chief’s thinking.

As Erdogan seeks to consolidate one man rule the one change that will really matter is who will run the economy. It is widely assumed that Mehmet Simsek, the finance minister, who was recently described by Bloomberg as “the last man standing from the team feted by investors as the driving force behind the nation’s rapid growth years,” will be dropped from the new cabinet. Erdogan wants to hand over the reins of the economy to another son-in-law Berat Albayrak, the current energy minister. Erdogan’s pet peeve is interest rates and he has publicly nagged the notionally independent Central Bank to slash these. If fully implemented, “Erdoganomics” could scare off investors and further squeeze the economy, the relative success of which in the face of globally adverse conditions continues to underpin Erdogan’s enduring popularity.

There is also talk that Hakan Fidan, the head of Turkey’s national spy outfit, Milli Istihbarat Teskilati (MIT), is on the chopping block, along with Feridun Sinirlioglu, the veteran undersecretary of the foreign ministry. Both men are close to the president and play a key role in running the country’s controversial Syria policy. They are also the main interlocutors in the Obama administration’s daily dealings with Ankara. Their removal, contended a senior administration official, would be “a disaster.”