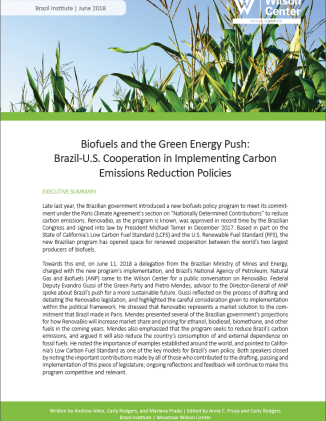 Late last year, the Brazilian government introduced a new biofuels policy program to meet its commitment under the Paris Climate Agreement’s section on “Nationally Determined Contributions” to reduce carbon emissions. RenovaBio, as the program is known, was approved in record time by the Brazilian Congress and signed into law by President Michael Temer in December 2017. Based in part on the State of California’s Low Carbon Fuel Standard (LCFS) and the U.S. Renewable Fuel Standard (RFS), the new Brazilian program has opened space for renewed cooperation between the world’s two largest  producers of biofuels.

Towards this end, on June 11, 2018 a delegation from the Brazilian Ministry of Mines and Energy, charged with the new program’s implementation, and Brazil’s National Agency of Petroleum, Natural Gas and Biofuels (ANP) came to the Wilson Center for a public conversation on RenovaBio. Federal Deputy Evandro Gussi of the Green Party and Pietro Mendes, advisor to the Director-General of ANP spoke about Brazil’s push for a more sustainable future. Gussi reflected on the process of drafting and debating the RenovaBio legislation, and highlighted the careful consideration given to implementation within the political framework. He stressed that RenovaBio represents a market solution to the commitment that Brazil made in Paris. Mendes presented several of the Brazilian government’s projections for how RenovaBio will increase market share and pricing for ethanol, biodiesel, biomethane, and other fuels in the coming years. Mendes also emphasized that the program seeks to reduce Brazil’s carbon emissions, and argued it will also reduce the country’s consumption of and external dependence on fossil fuels. He noted the importance of examples established around the world, and pointed to California’s Low Carbon Fuel Standard as one of the key models for Brazil’s own policy. Both speakers closed by noting the important contributions made by all of those who contributed to the drafting, passing and implementation of this piece of legislature; ongoing reflections and feedback will continue to make this program competitive and relevant.