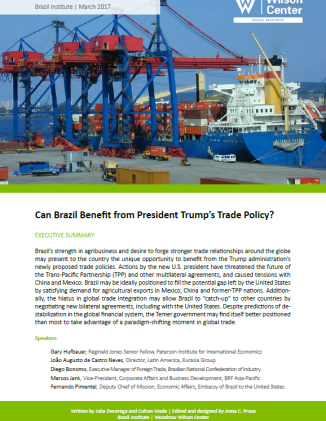 Brazil’s strength in agribusiness and desire to forge stronger trade relationships around the globe may present to the country the unique opportunity to benefit from the Trump administration’s newly proposed trade policies. Actions by the new U.S. president have threatened the future of the Trans-Pacific Partnership (TPP) and other multilateral agreements, and caused tensions with China and Mexico. Brazil may be ideally positioned to fill the potential gap left by the United States by satisfying demand for agricultural exports in Mexico, China and former-TPP nations. Additionally, the hiatus in global trade integration may allow Brazil to “catch-up” to other countries by negotiating new bilateral agreements, including with the United States. Despite predictions of destabilization in the global financial system, the Temer government may find itself better positioned than most to take advantage of a paradigm-shifting moment in global trade.

Download the report above or watch the event webcast to learn more.