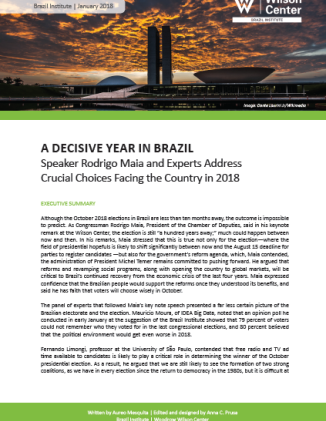 Although the October 2018 elections in Brazil are less than ten months away, the outcome is impossible to predict. As Congressman Rodrigo Maia, President of the Chamber of Deputies, said in his keynote remark at the Wilson Center, the election is still “a hundred years away;” much could happen between now and then. In his remarks, Maia stressed that this is true not only for the election—where the field of presidential hopefuls is likely to shift significantly between now and the August 15 deadline for parties to register candidates —but also for the government’s reform agenda, which, Maia contended, the administration of President Michel Temer remains committed to pushing forward. He argued that reforms and revamping social programs, along with opening the country to global markets, will be critical to Brazil’s continued recovery from the economic crisis of the last four years. Maia expressed confidence that the Brazilian people would support the reforms once they understood its benefits, and said he has faith that voters will choose wisely in October.

The panel of experts that followed Maia’s key note speech presented a far less certain picture of the Brazilian electorate and the election. Mauricio Moura, of IDEA Big Data, noted that an opinion poll he conducted in early January at the suggestion of the Brazil Institute showed that 79 percent of voters could not remember who they voted for in the last congressional elections, and 80 percent believed that the political environment would get even worse in 2018.

Fernando Limongi, professor at the University of São Paulo, contended that free radio and TV ad time available to candidates is likely to play a critical role in determining the winner of the October presidential election. As a result, he argued that we are still likely to see the formation of two strong coalitions, as we have in every election since the return to democracy in the 1980s, but it is difficult at the moment to guess the coalition leaders—the political environment has shifted significantly over the last year, and traditional alliances may no longer hold.

Oscar Vilhena Vieira, Dean of the Getúlio Vargas Law School in São Paulo, noted that former President Lula is likely to continue campaigning, despite his criminal conviction and sentencing to 12 years in prison, which was confirmed by a federal appeals court on January 24, with several avenues for appeals that could keep him in the race for months, and perhaps even through the election.

Matthew Taylor, American University Professor of Political Science, stated that new rules governing campaign financing and the shortening of the campaign to 45 days could influence the outcome in ways yet unknown. He also pointed out that the election is just the beginning: whoever wins the presidency will need to form a governing coalition in a Congress that has been dramatically reshaped by the anti-corruption investigation of the “Lava Jato” scandal aggressively pursued by federal prosecutors.