Event Summary: Dr. Rodrigo Janot on the Role of Plea Bargains in the Fight Against Corruption in Brazil 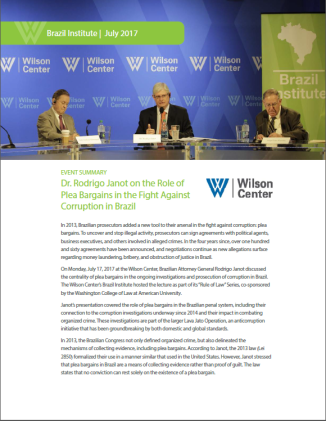 In 2013, Brazilian prosecutors added a new tool to their arsenal in the fight against corruption: plea bargains. To uncover and stop illegal activity, prosecutors can sign agreements with political agents, business executives, and others involved in alleged crimes. In the four years since, over one hundred and sixty agreements have been announced, and negotiations continue as new allegations surface regarding money laundering, bribery, and obstruction of justice in Brazil.

On Monday, July 17, 2017 at the Wilson Center, Brazilian Attorney General Rodrigo Janot discussed the centrality of plea bargains in the ongoing investigations and prosecution of corruption in Brazil. The Wilson Center’s Brazil Institute hosted the lecture as part of its “Rule of Law” Series, co-sponsored by the Washington College of Law at American University.

Janot’s presentation covered the role of plea bargains in the Brazilian penal system, including their connection to the corruption investigations underway since 2014 and their impact in combating organized crime. These investigations are part of the larger Lava Jato Operation, an anticorruption initiative that has been groundbreaking by both domestic and global standards.