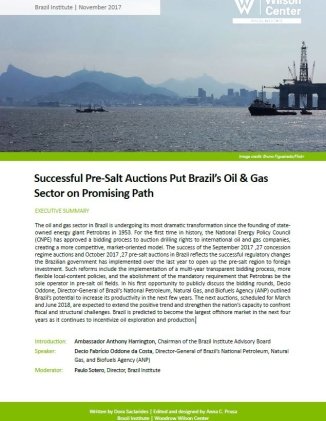 The oil and gas sector in Brazil is undergoing its most dramatic transformation since the founding of state-owned energy giant Petrobras in 1953. For the first time in history, the National Energy Policy Council (CNPE) has approved a bidding process to auction drilling rights to international oil and gas companies, creating a more competitive, market-oriented model. The success of the September 2017 concession regime auctions and October 2017 pre-salt auctions in Brazil reflects the successful regulatory changes the Brazilian government has implemented over the last year to open up the pre-salt region to foreign investment. Such reforms include the implementation of a multi-year transparent bidding process, more flexible local-content policies, and the abolishment of the mandatory requirement that Petrobras be the sole operator in pre-salt oil fields. In his first opportunity to publicly discuss the bidding rounds, Decio Oddone, Director-General of Brazil’s National Petroleum, Natural Gas, and Biofuels Agency (ANP) outlined Brazil’s potential to increase its productivity in the next few years. The next auctions, scheduled for March and June 2018, are expected to extend the positive trend and strengthen the nation’s capacity to confront fiscal and structural challenges. Brazil is predicted to become the largest offshore market in the next four years as it continues to incentivize oil exploration and production.