Skip to main content
Support
Explore More
Close
Event
Democracy
What (and Who) Will Emerge From the Crisis in Brazil?
On June 1, 2017 at 10:00 – 12:00
Share on FacebookShare on TwitterShare via Email
Share
Part of the Brazil Institute Event Summaries
Publication

Event Summary: What (and Who) Will Emerge from the Crisis in Brazil? 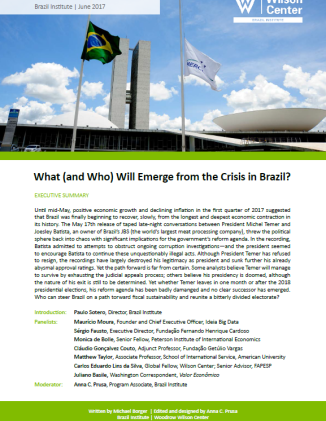 By Brazil Institute
Rule of LawDemocracyGovernance

Until mid-May, positive economic growth and declining inflation in the first quarter of 2017 suggested that Brazil was finally beginning to recover, slowly, from the longest and deepest economic contraction in its history. The May 17th release of taped late-night conversations between President Michel Temer and Joesley Batista, an owner of Brazil’s JBS (the world’s largest meat processing company), threw the political sphere back into chaos with significant implications for the government’s reform agenda. In the recording, Batista admitted to attempts to obstruct ongoing corruption investigations—and the president seemed to encourage Batista to continue these unquestionably illegal acts. Although President Temer has refused to resign, the recordings have largely destroyed his legitimacy as president and sunk further his already abysmal approval ratings. Yet the path forward is far from certain. Some analysts believe Temer will manage to survive by exhausting the judicial appeals process; others believe his presidency is doomed, although the nature of his exit is still to be determined. Yet whether Temer leaves in one month or after the 2018 presidential elections, his reform agenda has been badly damaged and no clear successor has emerged. Who can steer Brazil on a path toward fiscal sustainability and reunite a bitterly divided electorate?

Download the report above or watch the event webcast to learn more.