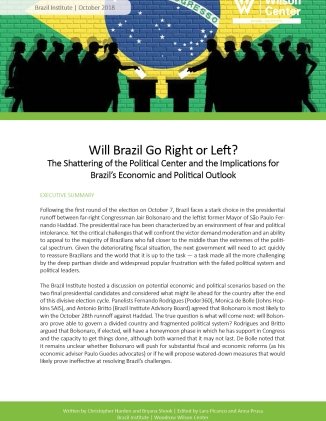 "The party structure in Brazil, the political system that was already exhausted, basically imploded, and we have to figure out how to move forward with the remnants of that." - Paulo Sotero, Director of the Brazil Institute

Following the first round of the election on October 7, Brazil faces a stark choice in the presidential runoff between far-right Congressman Jair Bolsonaro and the leftist former Mayor of São Paulo Fernando Haddad. The presidential race has been characterized by an environment of fear and political intolerance. Yet the critical challenges that will confront the victor demand moderation and an ability to appeal to the majority of Brazilians who fall closer to the middle than the extremes of the political spectrum. Given the deteriorating fiscal situation, the next government will need to act quickly to reassure Brazilians and the world that it is up to the task — a task made all the more challenging by the deep partisan divide and widespread popular frustration with the failed political system and political leaders.

The Brazil Institute hosted a discussion on potential economic and political scenarios based on the two final presidential candidates and considered what might lie ahead for the country after the end of this divisive election cycle. Panelists Fernando Rodrigues (Poder360), Monica de Bolle (Johns Hopkins SAIS), and Antonio Britto (Brazil Institute Advisory Board) agreed that Bolsonaro is most likely to win the October 28th runnoff against Haddad. The true question is what will come next: will Bolsonaro prove able to govern a divided country and fragmented political system? Rodrigues and Britto argued that Bolsonaro, if elected, will have a honeymoon phase in which he has support in Congress and the capacity to get things done, although both warned that it may not last. De Bolle noted that it remains unclear whether Bolsonaro will push for substantial fiscal and economic reforms (as his economic adviser Paulo Guedes advocates) or if he will propose watered-down measures that would likely prove ineffective at resolving Brazil’s challenges.