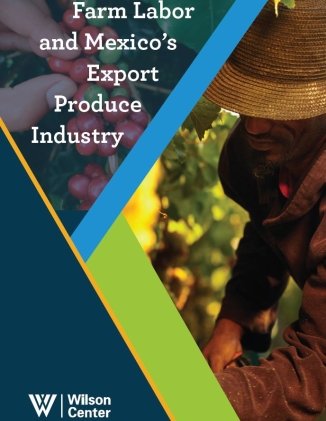 The Wilson Center’s Mexico Institute, along with CIESAS and Migration Dialogue, are pleased to launch a report on farm labor in Mexico’s export produce industry.

About half of the fresh fruit and a third of the fresh vegetables consumed in the U.S. are imported. Mexico is the major source of imported fresh fruits and vegetables, and export farms provide a million jobs for hired farm workers. The Farm Labor in Mexico’s Export Produce Industry survey funded by the Walmart Foundation and conducted by CIESAS and Migration Dialogue for the Wilson Center’s Mexico Institute, obtained statistically reliable data of workers employed on Mexican farms that export fruits and vegetables to the U.S. This project developed current farm worker data about the wages and working conditions of Mexican workers and internal migrants employed on farms that grow produce for U.S. consumers. This work was designed to test progress since news  reports about labor conditions and labor abuses dating back to 2014 (The Product of Mexico series in the Los Angeles Times in December 2014, in particular reported widespread violations of Mexican labor laws). The study is intended to help develop understanding on what has changed since, including what gaps and opportunities remain. The study is centered on export-oriented produce farms and, while broadly representative of this segment, is not an assessment of the overall produce market in Mexico that includes a sizeable market for locally consumed produce.

Among the report findings:

The worker survey, focus groups, and data analysis made several recommendations to maintain areas of progress and to enhance worker protections in Mexico’s export agriculture in areas where social gaps and risks remain.

Farm Labor in Mexico’s Export Produce Industry report is made possible through a through grant funding support from Walmart Foundation. The report provides the most statistically reliable data available on workers employed on Mexican farms that export fruits and vegetables to the United States. The comprehensive report tracks trends in Mexican exports, summarizes other studies of Mexican farm workers, analyzes the 2019 worker survey data, and summarizes case studies and focus group discussions with farm workers, employers, and other stakeholders.